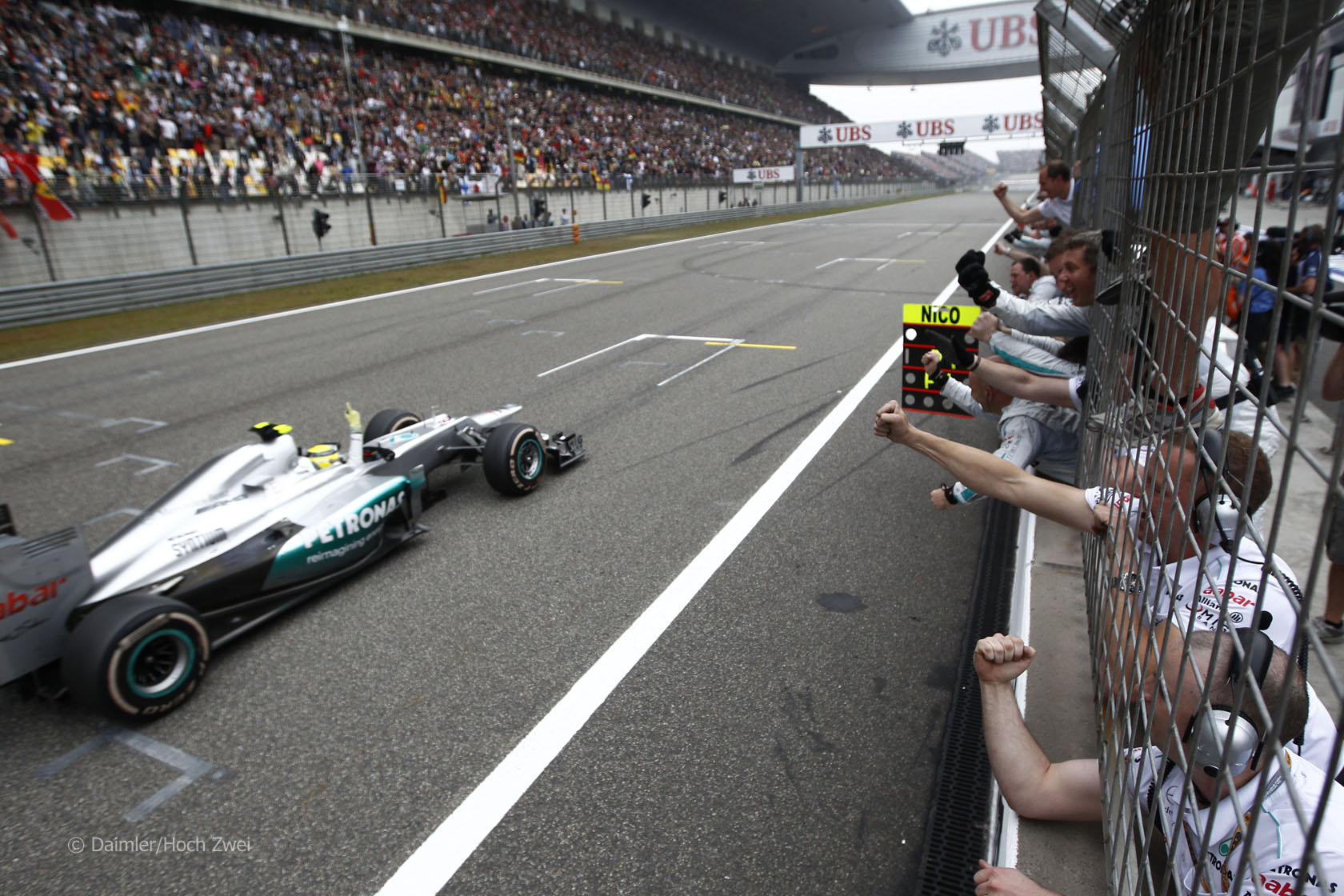 “We must move forward,” said Ross Brawn at the launch of Mercedes’ W03 earlier this year. “We?óÔé¼Ôäóve had two seasons of fourth in the world championship and that?óÔé¼Ôäós not good enough. So we must move forward.”

This was the target for Mercedes’ third year as a full works team in F1. Nine months later they had scored the first victory for the Silver Arrows since 1955 and lured one of F1’s top drivers – from their more successful Mercedes-powered rivals – to join them for next year.

But they had also had slipped from fourth to fifth in the constructors’ championship.

Heading into this season Brawn noted: “Last year we produced a very bold car and, although its more radical elements didn’t always deliver the results we had hoped for, the experience we gained has been invaluable to the design of the 2012 car.”

Much the same could be said of its 2012 campaign. The W03 did not suffer from a lack of imagination but while Mercedes poured effort into its own ideas it arguably missed out by not following the pack.

The W03 was not present at the first test of the year. Mercedes tested it at Silverstone – a spy shot appeared here courtesy of a reader – and once it joined the other cars in testing interest soon became focused on the team’s attempt to enhance the effect of DRS via its front wing.

The car’s performance at the beginning of the season suggested Mercedes were on to something. Michael Schumacher ran third in the opening stages in Australia. Then in China the W03s occupied the front row of the grid and Nico Rosberg shot off to an almost unopposed victory.

Had Mercedes found the ‘killer app’ of 2012 with their device, which was quickly dubbed ‘Double DRS’? Round six in Monaco gave further indication of the car’s performance as Schumacher was quickest in qualifying, losing pole position only due to a penalty from the previous race. In the race Rosberg hounded Mark Webber around the principality but there was no chink in Red Bull’s armour to exploit.

The team followed that up with third and sixth in Valencia, both Schumacher and Rosberg making rapid gains in the closing stages as the team got their tyre strategy spot-on. It put Schumacher back on the F1 podium for the first time since his comeback. But this opening phase of the season was the high water mark of Mercedes’ achievement in 2012. Schumacher managed a pair of third places in wet qualifying sessions at Silverstone and Hockenheim but the team soon found themselves scrabbling in the lower reaches of the points.

While Mercedes grappled with the side-effects of Double DRS their rivals were making gains in a more conventional area. Namely, trying to restore the performance lost due to the restrictions on exhaust-blown diffusers.

It took Mercedes until the Singapore Grand Prix to get their version of the ‘Coanda exhaust’ on the car, and after a troubled gestation it was eventually scrapped at the end of the year. Mercedes also tried their own version of Lotus’s DRS-enhancing set-up, but this too proved inadequate to the task of remedying the W03’s woes.

During this time the team’s performances slumped badly. They went five races without scoring a point and their fifth place in the constructors’ championship came under threat from Sauber.

This coincided somewhat unfortunately with the team’s coup of the year: the signing of Lewis Hamilton from McLaren. Their run of point-less races began after Hamilton signed for them, and he soon faced questions about whether he had made a mistake by switching teams.

The Hamilton deal came about as Schumacher prevaricated over whether he wished to continue his comeback for another year following a frustrating season. He missed out on several chances to exploit the W03 at its early-season best due to a series of car failures and, in China, a pit-stop blunder.

But unnecessary collisions in Spain and Singapore, and a horrible weekend in Hungary, were reminders that his best days are getting further away and now was the right time to stop.

The team will carry on without him in 2013 as the pressure to perform grows ever greater. Daimler has taken back full ownership of the team and chairman Dieter Zetsche is demanding better results.

They won a race, but they dropped back in the championship. They signed Hamilton, but lost Schumacher.

Was 2012 more a case of success or failure for Mercedes? Have your say in the comments.