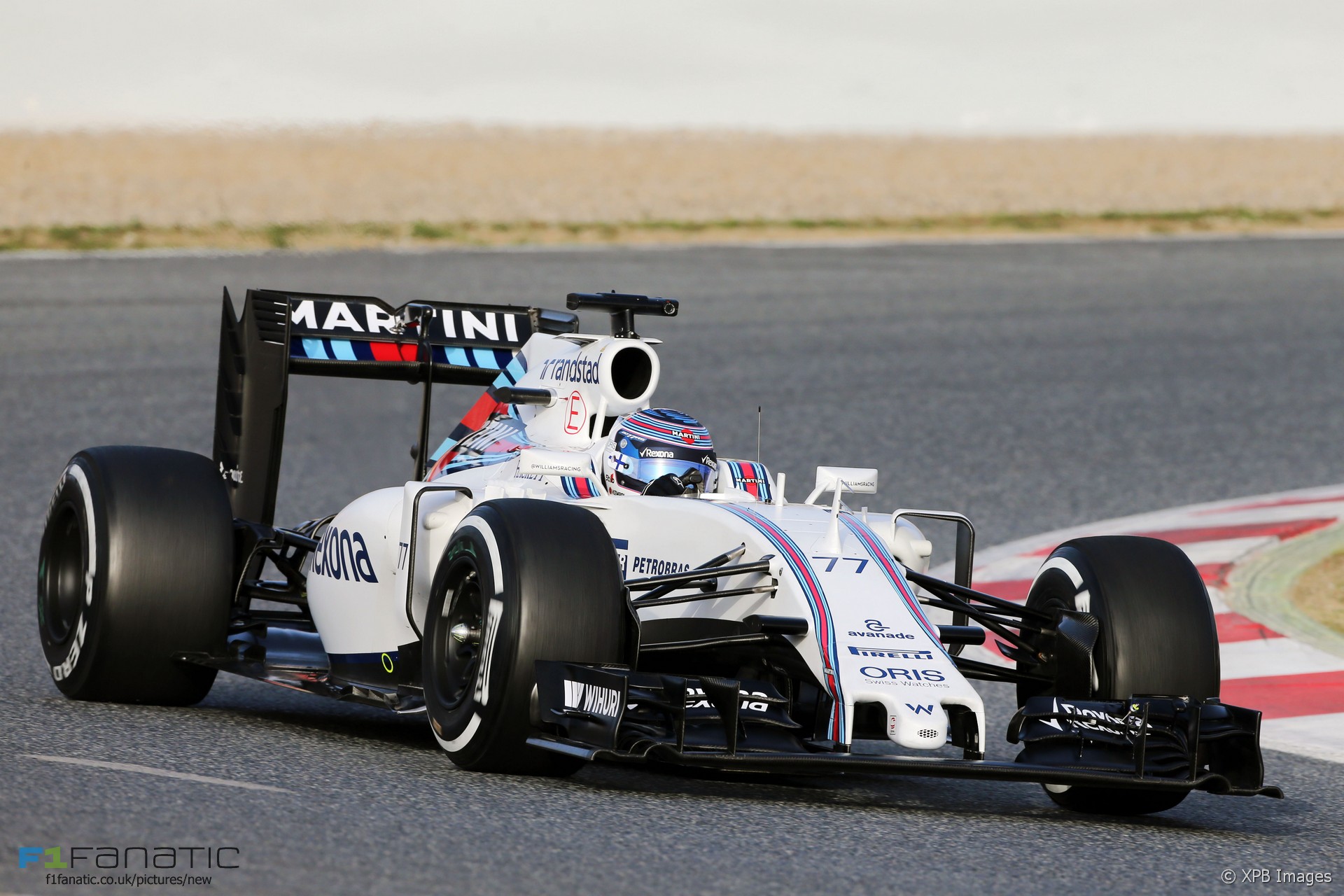 Third place in the constructors’ championship for two years in a row suggests Williams have achieved the limit of what is possible as a non-manufacturer team under the current rules.

The Grove squad was the first team to reveal its 2016 car, a design which outwardly looks very similar to its two predecessors. The aerodynamically efficient FW36 and FW37 made excellent use of the Mercedes power unit to deliver scorching straight-line speeds, but wet weather performance and low-speed traction has been a bugbear for the team.

Some of the changes introduced on the FW38 appear to be designed to tackle those weaknesses. And the team has further developments ready to hit the track for week two of testing. Here’s what can be seen on the car so far.

The FW38 debuted with the front wing and nose combination the team ended 2015 with. The nose features what appeared to be the optimal design solution last year with a wedge-shaped structure and a thumb-tip extension to meet the cross-sectional area regulations.

This is tipped to soon be replaced with a Mercedes/Renault-style shape, tapering inwards from the front bulkhead towards the tip with a deeper thumb extending underneath. While this narrows the gap between the front wing pylons, a higher volume of airflow can be pulled round either side of the nose to work on the aero devices that hang beneath the chassis.

The front wing is an area where Williams are a bit behind the curve, although they were quick to develop their own version of the ‘squarch’ (square-arch) wing following on from Mercedes. It is not quite as aggressive, however, so there is scope for them to make gains here.

One of the biggest differences between the FW38 and its predecessor lies in the suspension geometry. The front suspension in particular has visual changes from the outside and more will become clear as to how Williams have updated the internals as the year progresses.

Williams struggled at street circuits and in wet conditions in 2015 to the extent that an internal working group was set up to investigate the cause. The mechanical revisions seen on the new car are the culmination of all the work done over the past three and a half months since the group was first brought together.

The front suspension wishbones have all been lowered at the points where they meet the chassis, their angle relative to the ground much lower than previously. This lowers the front roll centre meaning the tyres will generate more scrub as the car corners, increasing their surface temperature. This should improve mechanical grip at low speed, while the roll centre will still be high enough to generate the tyre’s core temperature at high speed.

A lot of work has been done around the sidepod area to extract more performance from the rear of the car. The bulbous bodywork of the previous two years is gone and in its place are much sleeker lines, with the undercut sidepods a notable feature.

The main inlets to the radiators have been triangulated to a shape very similar to that on the Mercedes, although the surrounding aerodynamic devices (the turning vane on the sidepod’s shoulder, vortex generators and the cockpit fins) remain unchanged at the moment.

The majority of updates have taken place towards the rear of the car. Williams still use their very low and short gearbox to good effect, but have now added bodywork around the rear suspension which should be beneficial to how the rear diffuser works.

The bodywork surrounding the exhausts has been shrink-wrapped and the outlet aperture for the internals has significantly reduced in size. This shows that the new car has improved thermal efficiency so efforts can be concentrated on further enhancing the rear aero.

Following in the footsteps of Mercedes, Williams have sprouted their own take of the hooped rear bodywork. The slender carbon fibre piece loops out from a position next to the rear wing support and down to meet the floor below, with orifices made into it where needed for the rear suspension to pass through.

Its angle of attack is intriguing as being leant back implies that it actually induces lift. Its intended purpose appears to be funnelling the airflow which comes over the sidepod to meet with the hot air exiting the car from both underneath the bodwork and the exhaust plume, where the diffuser can then scoop it upwards as one big block of air. This should create a beneficial up-washing effect of air at the rear, rather than having it sprawl out in different directions.

As with almost all of the 2016 cars seen so far Williams has gone down the inverted Mickey Mouse exhaust route, with the central exhaust outlet poking out from beneath the elegant rear wing pylon and the two smaller wastegate pipes beneath either side.

With the rear crash structure almost identical to last year, this solution is neat and simple as little work will have had to be done to integrate the additional wastegate pipes around this area. The rear wing pylon has a small bulbous shape midway up in anticipation of a monkey seat winglet.

Although the rear wing profile itself appears to be a carry-over from 2015, the endplates have had extensive treatment. Its leading edge is now more rounded, with a large vertical slot made into it to alleviate the pressure gradient made by the rotating tyre on one side of the endplate and the high speed flow passing over the other.

Williams have also further refined the lower section of the endplate, the aggressively angled slats splaying airflow outwards to help draw out more air from underneath the car.

Further up are three series of fins swooping upwards. These have been popping up on a lot of cars over the past two years and are another device to aid the upwash of air at the rear end of the car.