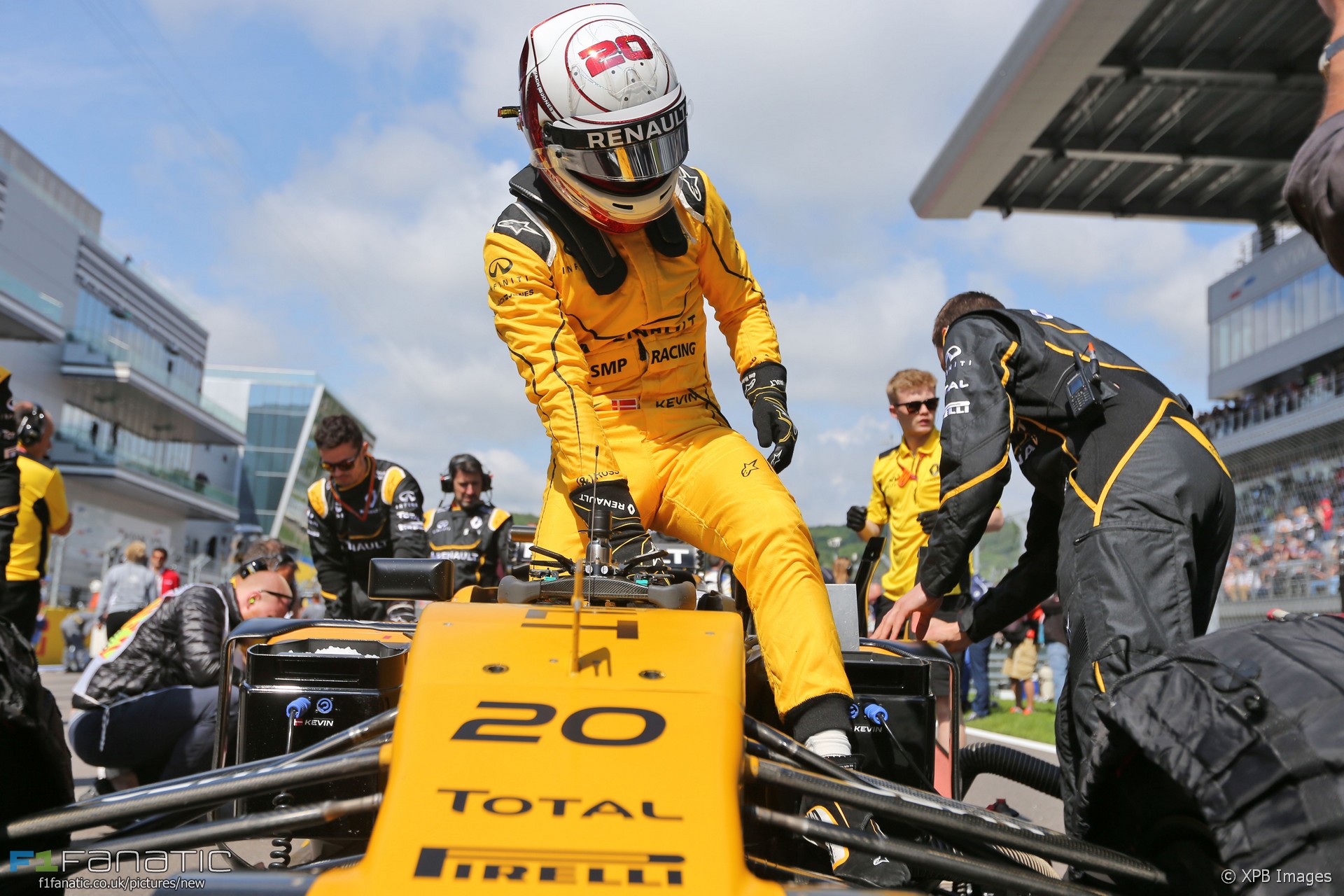 Kevin Magnussen’s Renault wasn’t quick enough for a place in Q2 – yet he grabbed an opportunity to bring it home well inside the points.

F1 Fanatic readers duly voted him Driver of the Weekend. But Fernando Alonso and Nico Rosberg – who achieved his first ever ‘grand slam’ – also impressed you in the Russian Grand Prix.

Magnussen, who had to sit out first practice, wasn’t entirely happy with his qualifying lap: he said he wasn’t able to get his tyres into the correct operating temperature. He missed the cut for Q2, lining up 17th on the grid.

His race got off to a good start initially but the chaos on lap one cost him some of the positions he’d made up. Racing in the thick of the pack, Magnussen impressed with some tenacious overtaking and made the most of a rapid Renault pit stop to gain a place at the expense of Romain Grosjean.

He successfully held off the Haas to the chequered flag and even managed to open out a small gap over his pursuer at the end of the race. Seventh place earned him and Renault his first points of the season.

I was going to vote for Hamilton since he made up so many places. But then I realised he only drove around the trouble and waited for some DRS and fresh rubber.

I should have voted for Rosberg, he did do a hat-trick, for sure achievement of the weekend. Great drive, great car, but honestly it looked to unchallenged. If Hamilton had been two seconds back, unable to pass him, that would change my mind. But even then we would complain about aero.

But then I watched YouTube (take note, FOM) re-watched some overtakes, rewound a bit, and noticed the rather superb job Magnussen did: 17th to 7th. That is something.

And it’s not like he was in a Mercedes with an engine change. No, he was 17th after qualifying before that was all the car had. And bagged seventh.
@Jureo

That Renault isn’t a particularly good car but he did over and above what it’s worth. Decent qualifying, excellent overtakes and a strong race finish given he was actually pulling away from Grosjean’s Haas.
Adam (@rocketpanda)

I thought there were quite a few contenders for Driver of the Weekend but for one reason or another most of them had something to discount them.

Rosberg took pole and victory again but again problems for Hamilton meant he was unchallenged, so with the car advantage Mercedes have this is the minimum you would expect and so it is difficult to tell at what level Rosberg was performing at, also before his car problems in qualifying Hamilton did look the quicker of the two.

Bottas was strong in qualifying but I don’t know whether it was just due to the highlights I saw but I didn’t really see much of him in the race.

Verstappen was a close to being my choice for driver of the weekend after a strong performance in qualifying and the race until his car let him down.

I thought Alonso had a very good race and the only thing that stopped me really considering him was that his team mate beat him in qualifying.

In the end my driver of the weekend was Magnussen, a great race bringing home Renault’s first points of the season.
@PJA

It was a good day for McLaren too: Fernando Alonso finished one place ahead of Magnussen and scooped the second-largest haul of votes in Driver of the Weekend:

I think I voted Alonso just out of relief actually that he has finally been able to do something with that McLaren.
@Pink-peril

Rosberg’s performance was also praised by many. But does a man who starts from pole, leads every lap, sets fastest lap and win the race automatically deserve to win Driver of the Weekend?

One of the easiest Driver of the Weekend decisions: Grand Slam, and kept the chasing champion in the same car behind him (also before Hamilton had a power unit issue).

What else do you want Rosberg to do to deserve a Driver of the Weekend? He even ignored the unwanted visitors in the winning room as much as politely possible.
@Coldfly

A grand slam under any conditions warrants a Driver of the Weekend endorsement in my books. Well done to Rosberg.
@Ferrox-glideh

He picked up pole, fastest lap and the win uncontested though, there’s no benchmark with which to measure if he did in fact give an incredible performance or just netted the results the car was easily capable of.

Until Hamilton’s car developed a water pressure problem he was closing down on Rosberg quite quickly.
@Philipgb

This was one of the more open Driver of the Weekend polls we’ve had – Magnussen won with less than a third of the vote – and several other drivers were also singled out for praise:

I think this one will go to the safe and fast hands which bring the points back.

This race highlights how much Magnussen and Grosjean are worth their pay cheques compared to their team mates. Getting those precious points whenever they are available seems ever more important. The same goes for Alonso and Button, who knows where this car would be with two inferior drivers in the cockpit (how far back may be the best way to describe it).

Out of the three (Grosjean, Magnussen and Alonso), I went with Grosjean who managed to escape the scrap, and did two very opportunistic passes to then hold on to its place in front of a powerless Hulkenberg. Another great race for who is fast becoming my favourite driver of the pack (currently Hamilton and Verstappen).
@tango

Was very tempted to go for Magnussen, he was great in the race and managed to show Palmer the way in qualifying despite losing track time to Sergey Sirotkin.

But for out qualifying a Ferrari and racing to a very comfortable fourth, the best the car could do and without ever looking like he was bothered by his team mate, it was Bottas for me.
@GeeMac