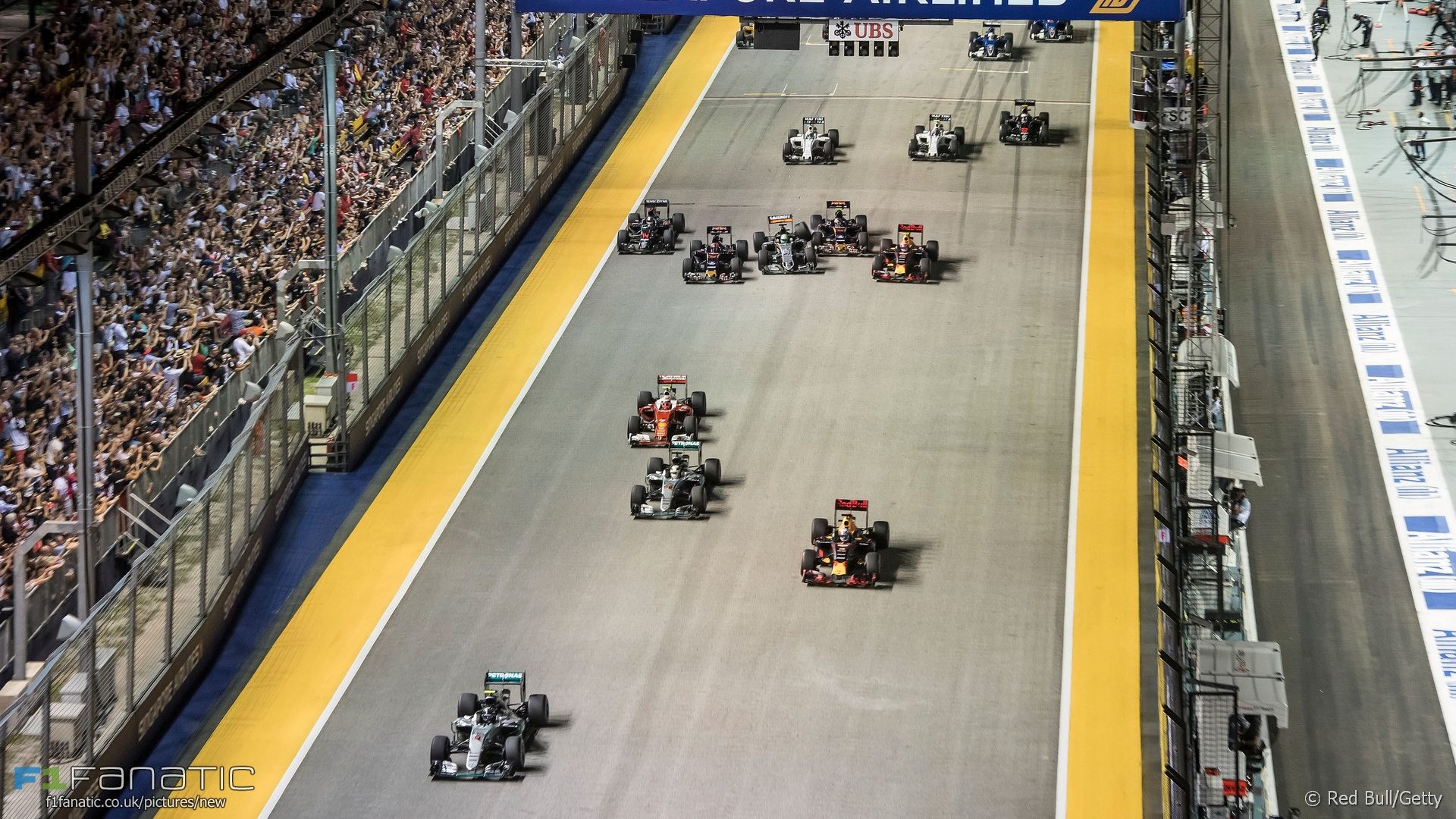 Daniel Ricciardo was less than half a second behind race winner Nico Rosberg as they crossed the finishing line on Sunday, making it the closest finish to an F1 race for six years.

Ironically it had been Mercedes’ decision to bring Lewis Hamilton in for a pit stop a few laps earlier which ultimately gave Red Bull the opportunity to do the same thing and put Rosberg under pressure. It produced an exciting conclusion to the Singapore Grand Prix which duly earned its second-highest rating from F1 Fanatic readers.

Appropriately, the only Singapore Grand Prix to receive a higher rating so far was the 2010 edition. when Fernando Alonso beat Sebastian Vettel by an even smaller margin. Here’s what you made of Sunday’s race.

First, for the strategy battles which were as tense as ever. If you don’t see two passes each lap it doesn’t mean there’s no action going on. It’s just on a different level and I find it as exciting as the physical battles on track.

Second, for the actual fights we had all over the place: Kvyat versus Verstappen was a classic, Raikkonen versus Hamilton was as exciting as hell (I lost my voice shouting at that), that three-cars moment with Vettel as well was to be remembered.

Third, you got to see all the team mates from top three teams going on different ways into the race only to find themselves all close together in the end. This is a remainder that those people know very well what they’re doing.
stefano (@alfa145)

Great race from start to finish. It got ‘boring’ for about five laps after the half way mark. Then it was on again! Started with contact off the line, finished with half a second between first and second.

The highlights were Kvyat’s defense on Verstappen early on the race, Raikkonen on Hamilton, Vettel’s climb through the order, the perfection from all the big pit-crews to pull off the absolutely staggering amount of varying tyre-strategies and the will-he wont-he last 15 laps.

Again no track limits rubbish or silly penalties ruining the result. Just want to note compared to last week the camera direction was amazing, vastly improved, good footage of the important stops as they happened. Lots of footage throughout the field when the start of the race when the front of the field was dull. And then focusing on the gaps between the leaders towards the end when that mattered.
Tristan

Not everyone was blown away by the action, however, and a few suspected Mercedes weren’t in as much trouble as they let on.

Started with some chaos before turning rather dull (bar Kvyat and Vestappen’s battle) until the final round of stops upped the tension and brought a bit of excitement, which sadly turned to naught as the race finished just as Riccardo got within striking range.

I don’t buy that Rosberg had a brake issue as he pulled out a gap early on when they were apparently critical while Hamilton wrestled a clearly poorly set up car around.
Craig Wilde (@wildfire15)

Good overtakes by Verstappen but only on mid-field runners. Ricciardo’s charge at the end summed up all that is wrong with F1 currently, change tyres and suddenly your car is several seconds a lap quicker than the race leader.

Both Mercedes had brake issues from the start but still managed to finish first and third, Ferrari are a joke spending so much money for so little return. The mid-field teams are all also-rans with about as much chance of winning a race as I do winning an Olympic gold.

Yet another season is drawing to a close with very little to put on a highlights reel.
John Toad (@ceevee)

The race also featured the alarming sight of a marshal running back to his post when the race was restarted before the track had been fully cleared.

The guy on the track, that’s really not good to see. I didn’t like that at all, really dangerous. Not OK.
@Mike

Huge miscommunication obviously. Hope whoever did the camera directing didn’t get sacked for showing the replay.

The focus on the near-miss should ensure a good investigation into the stewarding practices before something worse happens.
Tristan

That drama aside, it was a race which left this ticketholder happy.

Loved it. The strategy battle between the front runners and the build up of tension during the second half in particular had the entire crowd on the edge of our seats.

The driving was amazing this year. Other than the first lap, I don’t recall any of them driving wildly off the track or any yellow flags for that matter.