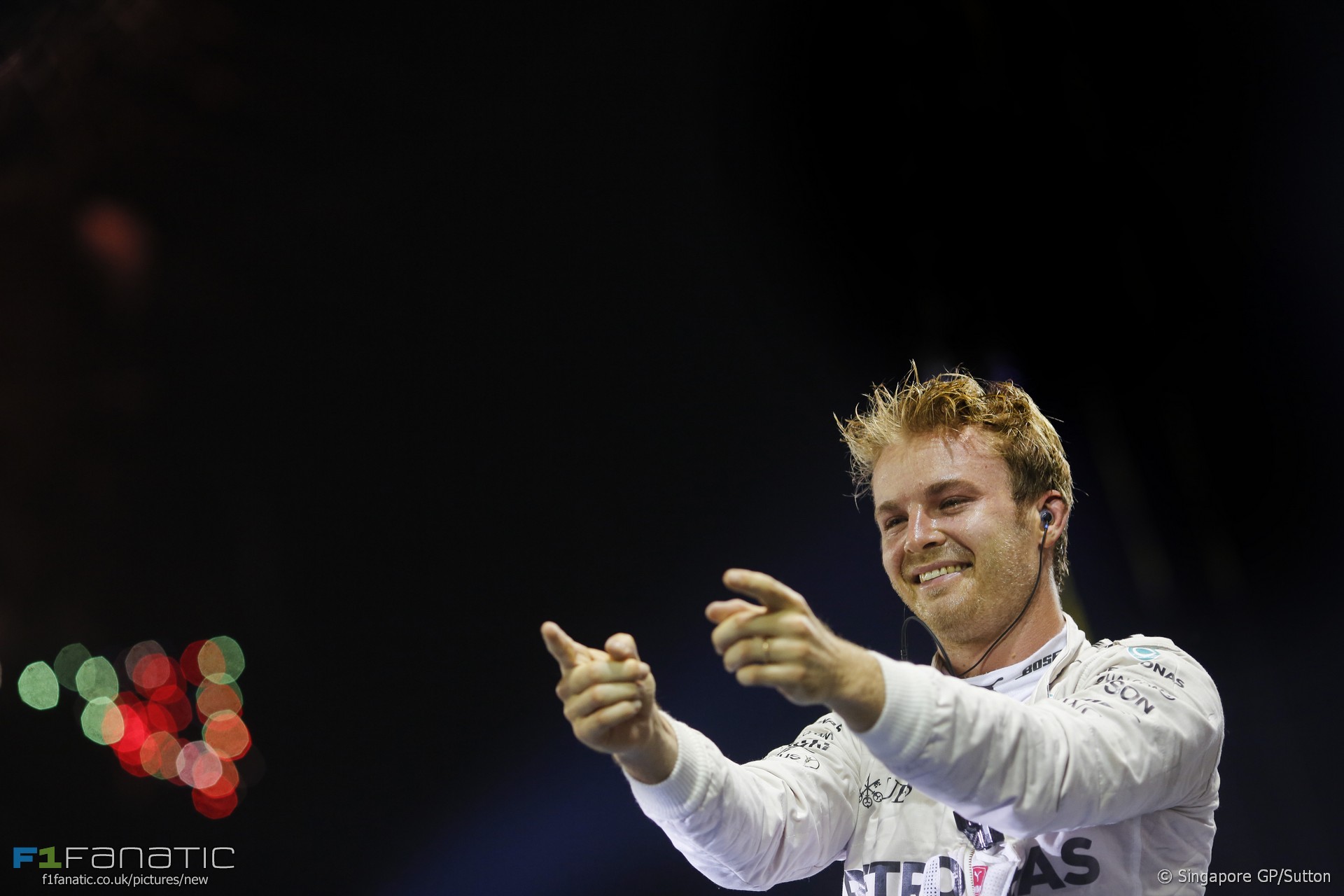 Nico Rosberg won the Singapore Grand Prix Driver of the Weekend poll by a margin of just three votes.

The race winner and championship leader topped the poll for the first time since last year’s Mexican Grand Prix.

Vettel narrowly missed out on winning the poll following his charge from the back of the grid to finish fifth.

It could be argued Rosberg won the race – or at least the battle against his team mate – in practice. He got into a groove much quicker around the Marina Bay circuit than Lewis Hamilton and didn’t suffer the same reliability woes on Friday afternoon.

All of this culminated in Rosberg scorching to pole by a whopping six-tenths of a second ahead of Daniel Ricciardo. There was no repeat of Mercedes’ previous poor getaways as Rosberg held his advantage and pulled away in the first stints, steadily building a margin.

This was completely eradicated by the race end however, as fresh tyres on Ricciardo’s car aided the Red Bull against Rosberg’s worn soft tyres. Nonetheless Rosberg dealt with the rapidly closing Ricciardo superbly and held on to win by a smaller margin than he’d taken pole position by.

Rosberg has indeed the best car on a normal track, but here the power of the engine doesn’t count so much, so the famed Red Bull chassis should have been at least on par. Ricciardo didn’t come close in qualifying, while Hamilton barely came third in the race.
@Gechichan

What more could have Nico Rosberg done?

Pole by quite a margin. Never in doubt in the race except when a well timed pit stop by Red Bull and traffic brought his victory again in danger. Even then, he kept his head cool in the physically hardest race of the season whilst knowing that any points loss might decide the championship from now on and did not the slightest mistake.
Feuerdrache (@xenomorph91)

My vote went to Rosberg who was sublime in qualifying and kept cool under the pressure, despite having a fast Red Bull breathing down his neck towards the end in a somewhat wounded car. Especially when his team mate at one point looked like he might not have gotten on the podium. Great weekend from him.
@Jamiefranklinf1

Vettel’s comeback drive saw him the catch the attention of many, while Ricciardo also earned plaudits after narrowly missing out on victory for the second year running.

Kevin Magnussen also received many positive comments, but not the votes to match. While Sergio Perez’s drive was also highly rated, but his yellow flag penalties earned him some criticism.

We can not forget the fact that Vettel finished 43.5s ahead of Max Verstappen, and ‘just’ 27.7s behind the race leader after almost two hours of racing. Not to mention he was 2.7s away from going through Q1 on three wheels.
Emilio Robles (@Kimiraikkonen5)

I voted for Ricciardo, I thought he couldn’t have done better throughout the weekend and while Rosberg drove amazingly to stay ahead and Vettel battled hard to work through the field, it’s harder to know if they could have done better, Ricciardo though definitely appeared to extract every last bit of performance out of that Red Bull.
Hans Herrmann (@twentyseven)

Magnussen managed tenth with arguably the worst car on the grid. He did it in the hottest race of the year without getting a single drop of water because his drinking system was defect.

He had a good qualifying just outside of Q2 and a great start in the race.
2face

Perez had a good race, but the recovery was his own doing picking up the penalty. The stewards may be inconsistent, but that doesn’t mean they weren’t right here.
Philip (@philipgb)

Rosberg is the tenth different driver to win Driver of the Weekend so far this year: