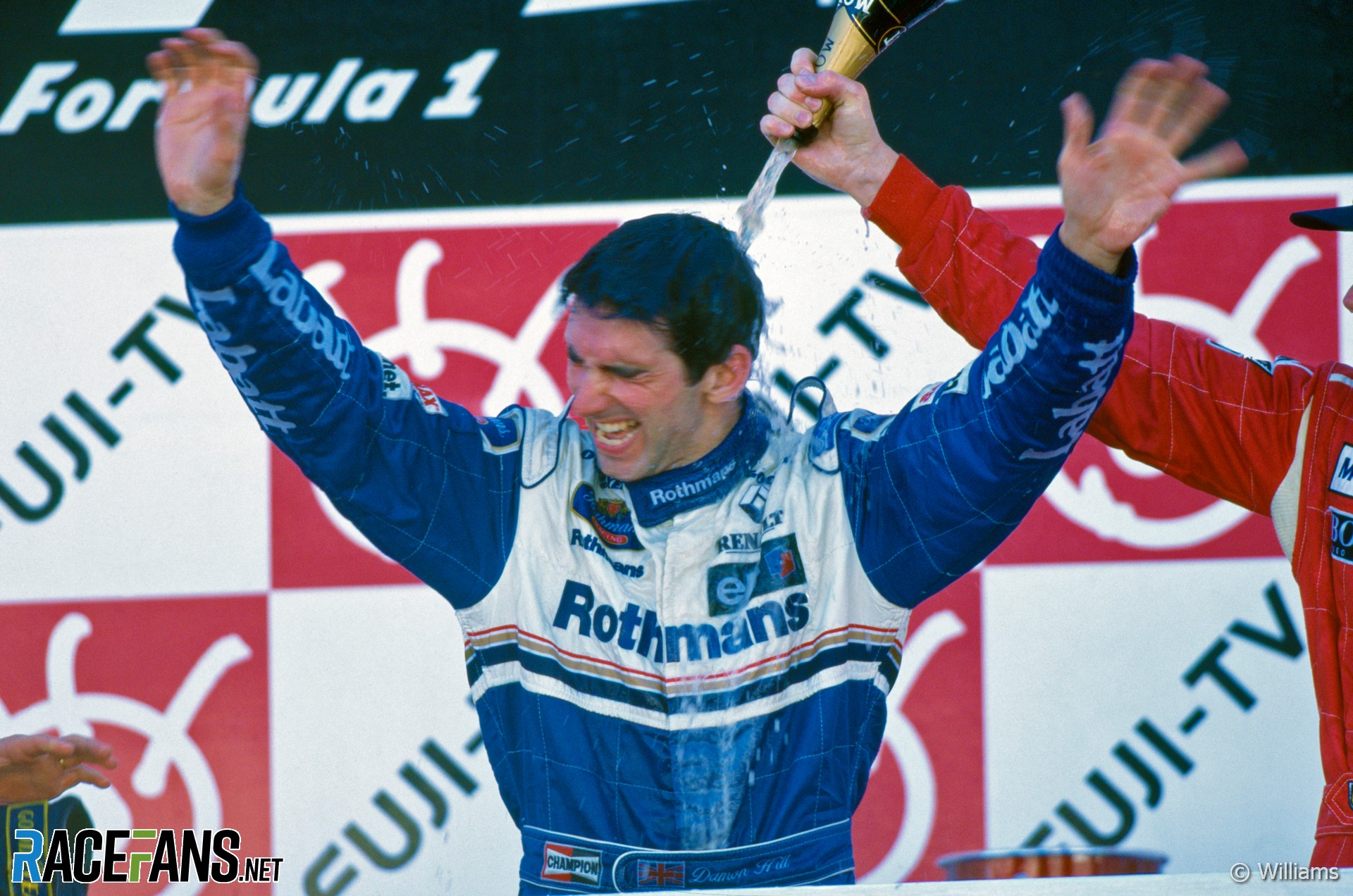 Damon Hill became the first ever second-generation Formula One driver to win the world championship on this day 20 years ago.

He was the overwhelming favourite heading into the final round of the 1996 season. But Hill carried an unusually high burden of pressure even by the standards of most world championship contenders.

He had missed out on championships twice already in the previous two seasons. In 1996 he had his best chance yet thanks to a formidable Williams-Renault, a weakened opposition and a rookie team mate. But in the preceding two races at Monza and Estoril he’d missed opportunities to put a lock on the title.

In Italy he was leading when he clipped a tyre stack, putting him out. He led early on in Portugal, too, and with team mate Jacques Villeneuve stuck behind Michael Schumacher’s Ferrari it seemed the title would finally be his. But Villeneuve sprung an audacious pass on Schumacher, then jumped Hill through the pit stops to capture victory.

Even with that success, Villeneuve’s shot at the title at the Suzuka showdown was a long one. He arrived nine points behind Hill with ten available for a win. As Hill had won seven races to his four, only victory for Villeneuve with his team mate placing outside the points-scoring top six could deny Hill the title.

Hill faced the added pressure of knowing this would likely be his last shot at a title. Williams had already announced they would dispense of his services once the chequered flag fell in Japan. Hill was bound for Arrows, a team which had never previously won a race. Already 36 years old, having reached F1 later in life than his rivals, this was Hill’s last and best chance to emulate his twice-champion father.

Rain affected the build-up to the race. This made for a treacherous surface at a circuit which, then as now, was one of the season’s most demanding.

This was Suzuka’s tenth time hosting the world championship and Hill couldn’t help but dwell on what had happened to his compatriot Nigel Mansell in F1’s first race there. A crash during practice left Mansell injured and unable to beat his team mate to the title.

Villeneuve, who had already showed an affinity for F1’s fastest tracks by out-qualifying Hill at Spa, rocketed to pole ahead of his tentative team mate. Hill only moved up to second place on the grid with his final effort.

Several of the F1 circuits had been unfamiliar to the rookie Villeneuve, but Suzuka he knew well from his days in Japanese Formula Three. Pole position kept alive his slender hopes of emulating Mansell by winning consecutive IndyCar and F1 titles.

The circumstances of Hill’s impending departure inevitably prompted claims Williams would favour the driver who was staying. But as Hill pointed out, the team had gone to additional trouble and expense to ensure a fair fight. The use of a spare car was normally rotated between drivers and this weekend was supposed to be Villeneuve’s turn, but the team brought an extra chassis for Hill, too.

“If there’s one thing I’ve learned about Williams it’s that their sticklers for providing equal equipment to both drivers,” he said. “They sent a spare car out to Japan, although it wasn’t my turn for the spare car.”

Michael Schumacher, beginning his last race for now as reigning world champion, took third on the grid after suffering a loss of power on his final run. He was watched on by brother Ralf, who had just won the Japanese Formula 3000 championship and would make his own F1 debut at the first race of 1997.

Suzuka was rife with rumours that Ferrari’s technical team for 1997 would be bolstered by the arrival of Ross Brawn from Benetton, who had engineered Schumacher’s first two titles. Benetton, who had already lost the constructors’ title to Williams, were still without a win in 1996. Their highest qualifier was Gerhard Berger, who shared the second row with Schumacher, while Jean Alesi languished down in ninth.

Mika Hakkinen had experienced a repeat of McLaren’s alarming front wing oscillations in practice. He took fifth on the grid and shared row three with Schumacher’s team mate Irvine, who had not used new tyres on his final qualifying run due to a communication error.

Behind them Heinz-Harald Frentzen started his final race for Sauber from seventh position before moving to Williams in Hill’s place. His team mate Johnny Herbert started six places further back having crashed heavily at 130R during practice.

To the surprise of no one, Minardi pay driver Giovanni Lavaggi failed to qualify after lapping almost two seconds slower than team mate Pedro Lamy in an updated version of the team’s 1995 car. In his six appearances for the team he’d failed to beat the 107% time on three occasions, including at the Hockenheimring and Spa.

With the constructors’ title already settled and both FW18s occupying the front row, the stage was set for a thrilling duel between the championship protagonists. An aborted start due a problem with the Mercedes engine in David Coulthard’s McLaren served only to heighten the tension.

And then, as the lights went out, it evaporated. Villeneuve spun his wheels and Hill was instantly by into the lead. His rival fell to sixth, and in that instant Hill was almost assured of the title.

Schumacher had also started sluggishly behind Villeneuve allowing Berger and Hakkinen through, while Irvine slotted behind in fifth. Alesi’s miserable weekend ended quickly as he spun into the barrier at the exit of turn two.

While Villeneuve focused his attention on Irvine, Hill had to beware an attack from behind in the opening stages. At the end of lap two Berger took a speculative look down the inside at the chicane but misjudged the move and damaged his front wing. Hill was fortunate to survive the attack just past the pit lane entrance, and while Berger limped back to the pits he held up several of the cars Villeneuve was chasing.

By lap 11 Villeneuve was all over Irvine and the next time by he forced his way past the Ferrari at the chicane. He then reeled off the fastest lap of the race so far, almost a second quicker than Hill was lapping at the time, and was rapidly bearing down on the next Ferrari.

However the first fuel stops were looming and Williams opted to bring Villeneuve in rather than lose more time behind a Ferrari. But any time gained by pitting was immediately lost when he had to be held in his box as Rubens Barrichello’s Jordan came by.

The upshot was Schumacher was easily able to keep his position ahead of Villeneuve when he pitted the next time around. On top of that he jump Hakkinen’s McLaren for second place. And when Hill lost time in his pit stop in similar circumstances to Barrichello it brought the Ferrari driver within range of the race leader.

By lap 19 Hill had a one-and-a-half second lead over Schumacher, who held a similar lead over Hakkinen. Villeneuve was next, two seconds behind the McLaren and edging towards it. but late in his second stint came another blow to his fading title hopes.

Believing a rear tyre was going down, Villeneuve headed for the pits earlier again on lap 32. Schumacher and Hakkinen came in on the same lap and their order was preserved, except Villeneuve now dropped behind the recovering Berger. And that was soon to prove the least of his problems.

Rounding the fearsomely quick turn one for the 37th time, Villeneuve’s right-rear wheel parted company with his car. The Williams was pitched into a gravel trap and nosed into a barrier while the wheel alarmingly landed in a spectator area, fortunately without hitting anyone.

From the very start of the race events had gone against Villenevue and this was the final blow. Hill was now the world champion. The team quickly got on the radio to tell him but Hill wasn’t ready to celebrate yet – or even say anything at all.

“When I got the word that Jacques was out, it threw me for a while,” he admitted after the race. “I just couldn’t take it all in as I was driving.” But Hill got back into his rhythm and reeled off the final 16 laps without fuss.

A few laps before the end of the race he passed by close to the pit wall as if preparing to celebrate his triumph. He finally saw the chequered flag on the 52nd lap – the race distance shortened by a lap due to the aborted start – and the championship celebrations could finally begin.

Villeneuve was phlegmatic in defeat. “Quite a few races from the end I knew that I wasn’t going to win the championship,” he said later, “but I still wanted to make it hard for Damon.”

As ever the final race of the season was a time of change for many, including some who didn’t know it at the time. However Hill now knew he would be carrying the number one on his car when he returned in 1997 in his Arrows-Yamaha.

Hakkinen took third for McLaren in their final race in Marlboro colours, ending a 23-year association between team and sponsor. Berger concluded Benetton’s first win-less season since 1988 in fourth place.

Martin Brundle finished his final race in fifth place having out-qualified and out-raced team mate Rubens Barrichello, whom it later transpired was on his way to new team Stewart. Brundle did not know it at the time, but this had been his final grand prix.

It was also the end of an era for British F1 fans as the BBC broadcast its final F1 race for more than a decade as ITV had picked up the contract. Brundle would become part of their coverage team alongside veteran commentator Murray Walker.

For Walker, watching Hill become world champion was a personally moving experience, and his famous commentary on the final moments of the race were both eloquent and emotional:

“There are the team in their blue and white London Rowing Club caps, matching the helmet of Damon Hill, which matches the helmet of his great father, Graham Hill. This is going to be a mighty emotional occasion for a lot of people, not the least of whom is myself. And Damon Hill will be concentrating in the cockpit there but when he comes out of it his arms will go up, his helmet will come off…”

“That is his wife, Georgie, she’s seen her husband become world champion, now she’s seeing him win the Japanese Grand Prix because he is almost home. This is something that many people didn’t think could possibly happen, they thought Damon would drive a cautious race. But he fought. He fought from second on the grid, he passed Jacques Villeneuve, he took the lead, he stayed there, and Damon Hill exits the chicane and wins the Japanese Grand Prix.”

“And I’ve got to stop, because I’ve got a lump in my throat.”

Did you attend the 1996 Japanese Grand Prix? Did you watch it at the time?

Share your memories of this race in the comments.

33 comments on “Damon Hill follows his father to F1 title”