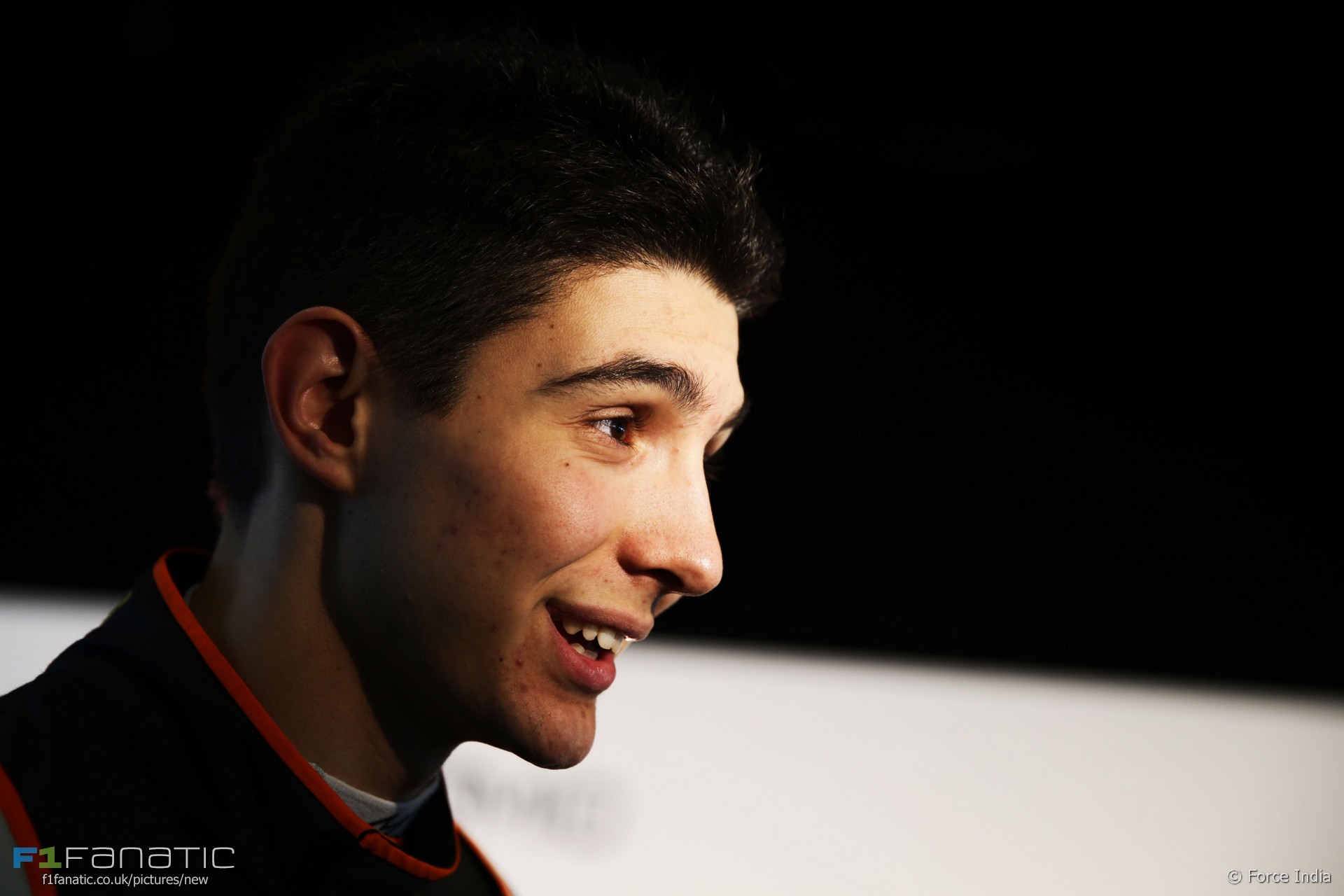 Esteban Ocon has been handed a breakthrough F1 chance with a full season seat at Force India for 2017.

Big things are expected of the former GP3 and Formula Three champion who is part of Mercedes’ young driver programme.

At the launch of Force India’s new car for 2017 Ocon discussed Nico Rosberg’s shock retirement, the sad demise of his former team Manor, and the gruelling lengths he’s gone to prepare for the increased physical challenge of the new cars.

Force India is aiming to improve on its best-ever result of fourth in the world championship with its new car for 2017.

“I’m very excited. Looking at the car you can only be excited. It looks properly aggressive, it looks like a proper man’s car. I can’t wait to see how it performs at Barcelona.”

“But more than that I think the physically point of view will be much harder than the previous years. It was hard already the last years but I think it will be twice as hard this year.”

The paddock was stunned by Nico Rosberg’s decision to retire after winning the world championship last year.

“I think the paddock will miss him. He was a great driver, a great person especially. He’s been speaking to me and giving me advice as well. So it’s sad that he retired but I understand his choice and I think we have to respect it.”

…Manor failing to make the grid for 2017

Ocon made his Formula One debut with Manor last year. He almost added to the team’s points tally at the Brazilian Grand Prix after a hair-raising near-miss with Kimi Raikkonen.

However that race saw Sauber move ahead of the in the points standings, which finished off the team’s chances of staying on the grid in 2017.

“It’s very sad. I was very sad to hear that. They’ve been giving me my chance, there is great people there. And they were pushiung very hard to get good results.”

“I was very sad after Brazil, I was pushing more than what I could do, I took a lot of risks, missed the pointsin the end. So very sad for them to not be on the grid because they really deserved it. And I hope the people that work there will find a job in Formula One somewhere.”

Pascal Wehrlein hardly had any more grand prix experience than Ocon at Manor. He expects to learn a lot from new team mate Sergio Perez.

“He’s a very experienced driver. What he did with this team was really nice, he pulled up the team so much and he has achieved great things with this team.”

“I will have a lot to learn from him, especially in the first test. It will be very important to me to see what he does, see how he communicates with the team and wants to make progress with the car. So it’s going to be nice and interesting for me.”

“My personal target is to arrive at the first test and be straight away on the pace.”

…racing in Monaco this year

With car widths back up to two metres, will overtaking be completely non-existent at Ocon’s ‘home’ race?

“It was very hard to overtake already before. A car this much wider is going to be even harder.”

“On normal tracks it’s going to be that there’s more drag. So when you open the DRS you get more straight-line speed compared to the guy in front.

“I didn’t understand why the Baku F1 race was not interesting after the GP2. But I think it was luck. I think this year is going to be a lot more interesting to see.”

…training for the demanding new cars

The results of Ocon’s brutal off-season training regime were clear to see at Force India’s launch. The 20-year-old has clearly spent a lot of time building up his muscles, particularly in his neck.

“I did two months of training in the Pyrenees, high altitude. I’ve been pushing very hard every day and I’ve been adding on five kilos.”

“We did reaction, co-ordination, mental work, speed vision work and also nine hours of cardio per week and ten hours of gym per week. So that was very hard. I can’t be more ready for the season.”

“We had to run [through snow] and we had targets for the heart rate. My target was between 170 and 185 [beats per minutes] for like 15 minutes. That was really hard.”

“So it’s been very hard training regime, not also the training but the eating part of it was very hard. I had to eat so much food. I had to eat what we call steak a cheval, it’s steak with eggs on top. I had to eat four of them, 450 grams, and then I had to do the same with chicken in the evening.”

“If I struggle – I will struggle for sure, it’s going to be hard – but if I can’t drive the car then I don’t know what I can do more.”

11 comments on “Ocon on Rosberg, Manor and steak a cheval”