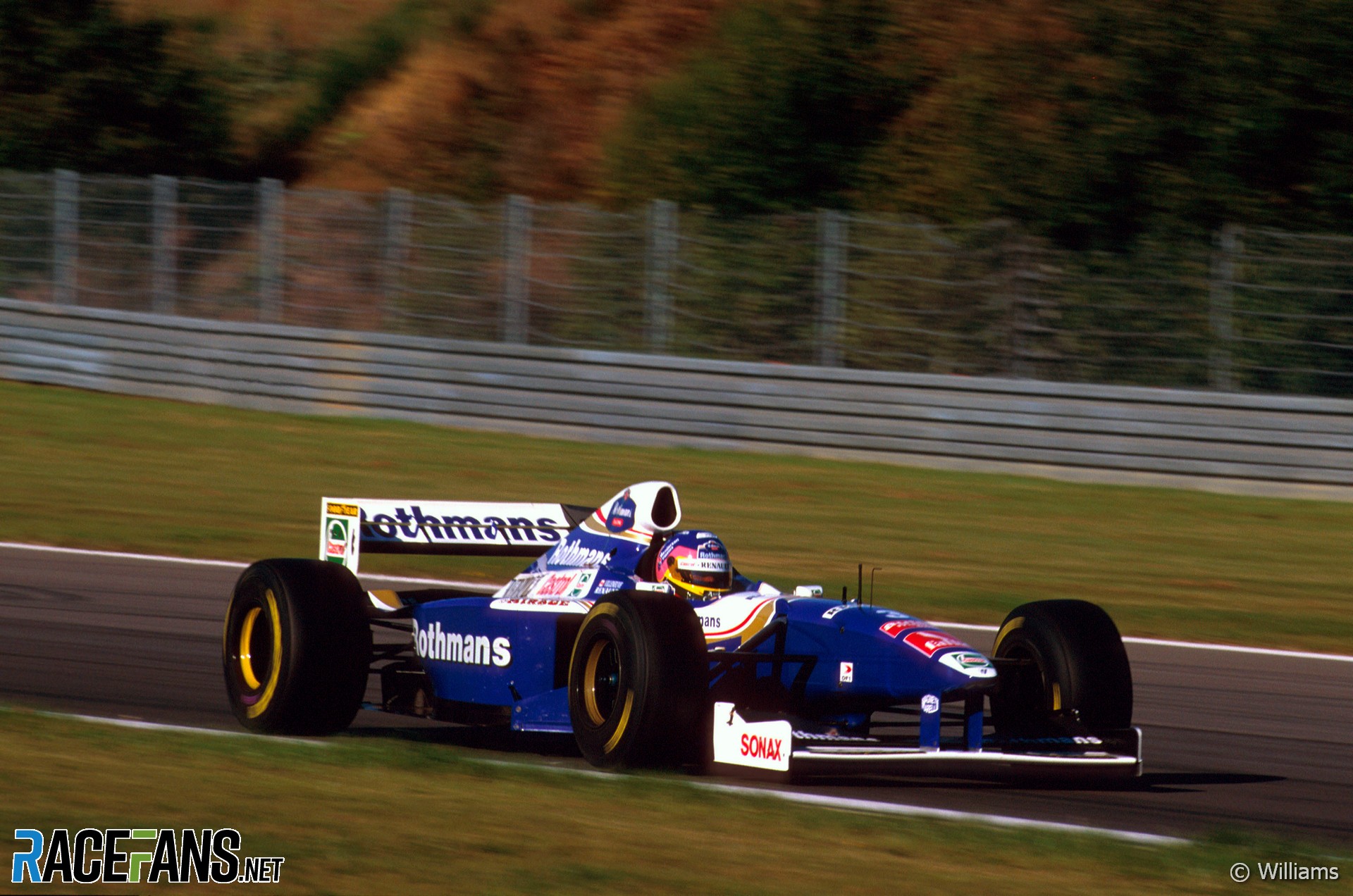 “We’re worried we might have lost the championship today,” rued Michael Schumacher’s press officer Heine Buchinger. The Ferrari driver’s race had been ruined at the first corner when he was hit by his brother Ralf Schumacher’s Jordan.

He wasn’t the only person ruing what might have been. McLaren were on course for an emphatic one-two on home ground for engine supplier Mercedes when both their cars blew up within moments of each other.

The Nurburgring had returned to the F1 calendar two years earlier under the title of ‘European Grand Prix’, capitalising on Schumacher’s popularity by adding a second race in Germany. But with that title now being used for the season finale at Jerez, the Nurburgring round was re-titled as the ‘Luxembourg’ Grand Prix.

The track was unchanged except for the installation of vicious new kerbs at the chicane before the final corner. Villeneuve led the drivers’ criticism of the changes. “The kerbs are harsh and if you run over them at certain points it would be easy to cut a tyre or smash a home in the monocoque,” he said. “There seems to be enough room there to have a proper corner.”

For the second race in a row the fight for pole position was between Villeneuve and Mika Hakkinen. But unlike in Austria it was the McLaren driver who came out on top, claiming the first pole position of his career.

“In Austria I had a perfect lap,” said Villeneuve. “Here I made a few mistakes and Mika stayed in front. That’s good. The best thing is that Michael is behind.”

Michael Schumacher had to be content with a third-row start for his home race. It was also his one hundredths grand prix start, which Bernie Ecclestone marked in traditional fashion by applying a slab of cake to the twice-champion’s face.

Schumacher was separated from his title rival by Heinz-Harald Frentzen, who was on good form at home, and Giancarlo Fisichella’s Jordan. He shared the third row with David Coulthard, whose rapid starts in the McLaren had drawn the ire of Ferrari boss Jean Todt.

“McLaren are using an electronic throttle control system which is against the spirit of the regulations and we do not accept it,” Todt complained. “They are not the only ones, either.” Controversially, the FIA had approved a request from McLaren to use their engine rpm data as a variable in order to manage their throttle control. Their rivals suspected this allowed them to create a form of traction control which had supposedly been banned three years earlier.

Following a strong showing at the A1-Ring a week earlier, Bridgestone weren’t in as good shape at the Nurburgring. Gerhard Berger in seventh and Ralf Schumacher in eighth made it a Goodyear sweep of the top eight places, while Rubens Barrichello led the Bridgestone charge with ninth in his Stewart. Jean Alesi completed the top ten.

Three months on from suffering leg fractures at the Circuit Gilles Villeneuve, Olivier Panis returned for Prost and qualified 11th. This was a fine result from a driver whose pained manner indicated he was still some way from the end of his healing process.

Meanwhile Jarno Trulli, who had stood in for Panis, took up a commentary gig. Shinji Nakano remained in the second Prost but qualified a full second off Panis.

During qualifying Jan Magnussen’s Stewart came to a smoky stop on the pit straight. Villeneuve, who had already collected a series of reprimands for failing to slow in yellow flag zones, was among those to pass the recovery scene. On this occasion he avoided a penalty, but at the next race in Japan a similar incident proved extremely controversial.

Neither championship contender had particularly good starts. But Schumacher’s was disastrously worse.

From sixth on the grid, Coulthard again got a terrific launch and arrived in second place behind his team mate, edging Villeneuve aside. The Williams driver then found team mate Frentzen bearing down on him.

“I had a better start than Jacques and I was alongside him and a nose ahead,” explained Frentzen afterwards. “But I was on the outside line and I didn’t want to take any risks going into that corner and take somebody off, especially Jacques.”

I had a lot of pressure around me and I tried to be tight on the inside but I touched with my front wheel his rear wheel, but only side by side, and in that manoeuvre my hand banged into the dashboard and I switched the ignition off.”

Frentzen got his car going again, albeit in 15th place. But while the Williams pair survived their first corner contact the same could not be said of the Jordans.

Fisichella started poorly while his team mate got off to a flier. Ralf Schumacher had been under the cosh of his team mate for several races, and now spied an opportunity to put one over him. But it meant sticking his car between his team mate and his brother, and the outcome was disastrous for all three.

“We all braked a bit late in the first corner and then there was not enough space for everybody,” rued the younger Schumacher. “I got hit by Giancarlo but not on purpose, he just braked a bit too late, that was the reason, so I just jumped up and hit Michael as well.” The Jordan’s rear wheel passed alarmingly close to the cockpit of his brother’s Ferrari.

Writing in his autobiography 10 years later Eddie Jordan claimed Ralf had been doubly angered by the fact ‘Miss Germany’, who had accompanied him to the race, had later been seen in Fisichella’s company. Whatever the underlying cause, a furious Jordan gave both his drivers a “ferocious” dress-down afterwards. The stewards did not get involved, other than to give the younger Schumacher a formal reprimand for crossing the track on foot afterwards (Jos Verstappen received the same when he spun out later on).

Meanwhile the elder Schumacher parked his Ferrari in the pits with bent front-right suspension. His title rival Villeneuve was now staring at an open goal.

The problem was it was occupied by two McLarens. And while Villeneuve could keep Coulthard in sight, Hakkinen was 10 seconds clear of his team mate by lap 17. And Villeneuve’s hope Williams might beat McLaren in the pits was dashed 11 laps later when he and Hakkinen pitted together.

Villeneuve was at a loss to understand what had gone wrong. “I was surprised because we had a good pit stop and even though he had to put in a lot more fuel than we did, somehow he still had a big gap after the stops,” he said. “I don’t know what happened there. We are going to have to figure out why they are so quick.”

But while McLaren-Mercedes had found speed, they had not yet cracked reliability. Hakkinen had already retired from the lead at Silverstone and the A1-Ring, and at the Nurburgring he completed a hat-trick on lap 43. Not only did he have the misfortune to be robbed of a certain win on his 29th birthday but astonishingly his demise was preceded by his team mate’s a few minutes earlier. It handed Villeneuve the lead and victory on a platter.

Thanks to the first-lap commotion both Stewarts were running inside the points places at the end of the first lap for the second race running. But as in Austria neither stayed there until the end, both succumbing to technical problems before the chequered flag fell.

The second Ferrari also dropped out and that wasn’t the only problem for Eddie Irvine. “The car was just atrocious,” he complained. “It’s the worst I’ve ever had the car in the race.”

“Normally the car is fantastic in the race, today it was just a joke. I just couldn’t turn in because of the oversteer. Once you get through the oversteer, it just understeers and as soon as you put on the power it snaps into oversteer. And it was brick slow, so slow down the straights it’s unreal.”

With both Jordans, Ferraris and McLarens out, Benetton capitalised. Now under the management of Prodrive’s David Richards following the removal of team boss Flavio Briatore, the team got both cars home in the top four and completed a sweep of the leading positions for Renault power.

Another beneficiary of the high-attrition race was Pedro Diniz. Team mate Damon Hill stalled during his pit stop, allowing the Arrows driver to grab fifth. He held off Panis, who impressively grabbed a point on his return.

But Villeneuve’s second win in eight days was a body blow to Schumacher’s title hopes. It gave the Williams driver a nine-point lead with 20 available over the final two races.

“Today was terribly disappointing,” Schumacher admitted, “the worst possible result for the team and me.”

“I hoped that the other teams and cars might help me, that it would be god for us if the McLarens could finish first and second, but that did not happen.”

But two surprises lay in the future. One was a dramatic swing in Villeneuve’s title prospects when the championship headed to Suzuka.

The other was that this new force in F1, who had taken pole position on his debut, won 11 of his first 31 races and was on the cusp of clinching the championship, would never stand on the top step of the podium again.