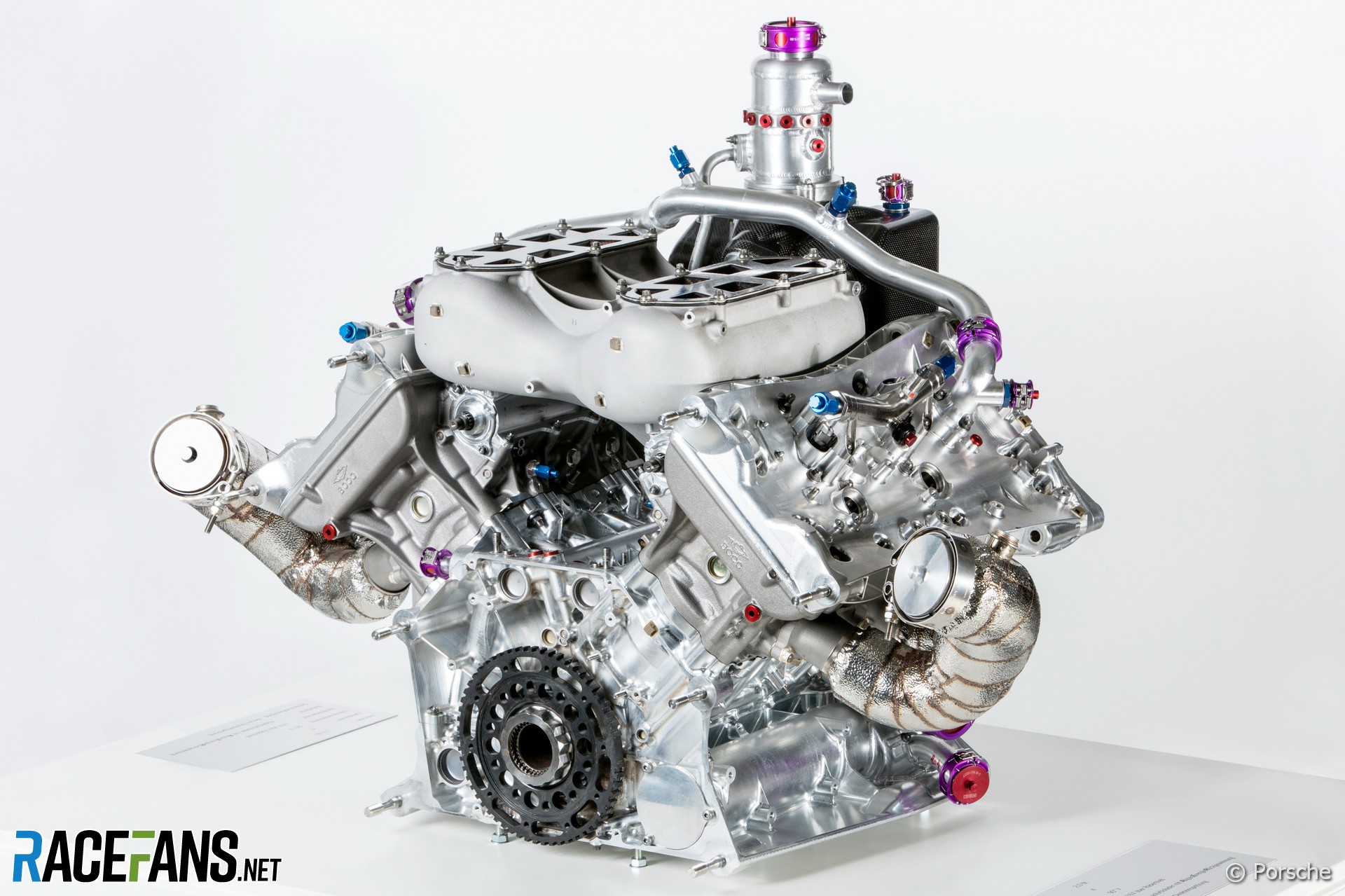 @DieterRencken has joined F1 Fanatic as columnist and will bring our readers news from the paddock throughout 2018. In the second edition of his weekly column for us Dieter reappraises the ‘world motorsport engine’ concept which was recently revived by FIA president Jean Todt.

Like cost cap discussions or equitable revenue structures, a recurring theme in Formula 1 is the concept of “universal motorsport engines” – also known in some quarters as “world” or “global” engines – designed to cater for various forms of motorsport, with the addition of larger specification (or increased numbers of) turbochargers or hybrid systems providing differentiation across categories and applications.

However, as is very much the case with the commercial discussions, confusion exists over exactly what the proposal involves.

One misunderstanding concerns what are viewed as identical engines used across various categories: i.e. F1 and LMP1 running same-spec engines, F2 and LMP2 units being identical, and even WRC and WTCC engines being totally interchangeable:

Where appropriate that could be the case, but such compatibility is a bonus rather than stated priority. Rather, the concept allows multi-brand manufacturers – Volkswagen with seven passenger brands, or Toyota with Lexus, BMW with Mini, Renault and Nissan – to base disparate competition programmes around one basic engine concept, each complying with different regulations.

Thus, for example, VW could build an F1 engine for Audi, LMP1 powertrain for Porsche, VW version for WRC, Seat derivative for WTCC and Skoda-badged WRX unit – all built in the same factory, using common technology and components where permitted / appropriate.

Simultaneously an independent supplier such as Cosworth could offer a range of engines for these categories for sale, offering them at lower prices due to economies of scale.

Another misunderstanding is about exactly what constitutes “world engines”, with a common misconception being “specification” units, identical across the grid, as per, say, F2 or GP3 power units, and supplied by a single company, usually via tender:

The main commonalities are basic dimensions, materials and geometries, with internals obviously catering for stresses and heat of certain applications (say F1) over others (say F3). Placed side-by-side after their respective ancillaries are attached would provide visual differentiation, while output, sounds and life cycles would be different. Indeed, they could be built by a variety of suppliers.

The final major misconception is that a single supplier (or selected suppliers) would supply all engines across the board for all categories, as per current spec formulae. Again, that is not an overriding priority – but could be leveraged as political threat should existing suppliers become intransigent (see above re: Cosworth).

The “universal motorsport engine” concept was first floated in mid-January 2009 via an email sent by the FIA to Ricardo, whose website describes the company as “a global engineering and strategic, technical and environmental consultancy business with a value chain that includes the niche manufacture and assembly of high-performance products”.

The date of January 2009 is extremely telling: At the time the Formula One Teams Association was an emerging force, and locked in disputes with the Max Mosley-led FIA and the president’s friend of 30 years, Bernie Ecclestone – then indisputably F1’s tsar. A breakaway series was on FOTA’s radar – one was announced six months later – and a “universal engine” provided the FIA with a robust weapon.

Why? Obviously if F1’s reliance on motor manufacturers – the driving force behind FOTA – as primary engine suppliers could be reduced (or eliminated), then such teams would pose less threat to motorsport’s authorities, who could play to independents teams, their participation sweetened by access to a power unit supplied by one or more independent supplier.

Significantly, four months after the email to Ricardo the FIA opened entries to “budget” teams powered by Cosworth units – which is how the ill-fated quartet of Virgin (Manor), Lotus (Caterham), Campos (HRT) and USF1 (stillborn) came to enter F1 in May 2009…

Crucially, at the time current FIA president Jean Todt, regularly blamed for introducing the current hybrid engines, had not made himself available as presidential candidate for the governing body’s election scheduled for October 2009 – and thus held no post within the FIA’s structures.

Yet, the original “universal engine” F1 off-shoot as proposed by Ricardo bears eerie resemblances to the original 2013-20 1600cc inline four-cylinder hybrid proposal, incorporating both kinetic energy recovery system (K-ERS) and “turbo compounding” (Heat-ERS). F1 Fanatic has seen a copy of Ricardo’s proposal, and can reveal that the original email requested feasibility studies on:

All this, though, flew out the window in 2011 after Ferrari / Mercedes objected to the I-4 configuration and campaigned for V6 internal combustion units on the basis of 1) performance car road relevance, and 2) challenges of mounting I-4 units as they have only two mount points (top and bottom), whereas V6s draw on three: at each extremity. Given the expected increases in torque, robust mountings were considered crucial.

Thus the FIA put the issue to the vote, with Renault – a four-cylinder stalwart – being the sole dissenter, but agreeing “for the good of F1”. Vee-6 engine introduction was delayed to 2014, with the rest, including infamous gripes about lack of noise, rampant unreliability, exorbitant costs, domination by a single supplier (Mercedes) and the utter inability of another (Honda) to get to grips with the tech, passing into history.

Now, though, F1 has but three years remaining before the current formula expires, and as such time is tortuously tight given that last time around it took F1 five years to introduce an engine that in the end no one really wanted. As former Williams technical director Patrick Head observed: Success has many fathers, but failure is an orphan…

Now that most manufacturers have mastered the technology it would be myopic to totally ditch the formula, particularly as most of the heavy spending has been incurred. Various options are once again being floated, including retention of the current formula but with minor changes to make the technology attractive to other categories.

However, the chances of a single configuration doing duty in 11 categories are zero, particularly as some of the categories listed in the 2009 study are defunct, and others now far removed from the regulations prevailing at the time. It makes good commercial sense to spread the base technology across three non-competing formulae – F1, IndyCar, and LMP1 – and possibly rope in F2 as well by using dumbed-down units.

This is, though, hardly a re-adoption of the “universal” or “world” engine concept as some suggest, but rather a limited offering of engines with common architectures, engineered according to the needs of individual categories. Thus VW could conceivably ago F1 with Lamborghini, LMP1 with Porsche and Indycar with Audi, with the basic motorsport engine produced within the same department.

They do it already with road car engines with far greater production runs, so why not with competition engines?

Equally, Cosworth or Ilmor could produce engines for all three series, badging them according to customer needs. Thus F1 version could be sold to teams (possibly sponsored by commercial entities, whose name could appear on the covers), while the LMP1 version could be sold exclusively to a manufacturer; ditto the IndyCar engine.

With LMP1 down to a single manufacturer and Indycar on two, it makes sense to consider common engine architectures, as Todt pointed out during his last media briefing in Abu Dhabi: “I think at the moment each category of motorsport has its own single regulation, so probably we should try to see if we could have some synergies.

“Incidentally, it’s covering [approximately] the same kind of mileage [as an F1 engine under 2018’s three-engine regulation], because if you take three or four engines, it’s about 5,000km, and the longest race in sports cars is Le Mans, which is about 5,000km, so it could make some sense.

“Probably it would encourage some manufacturers actually involved by participating to some other categories… you think Ferrari, Mercedes, McLaren, even Red Bull, why they will not think of eventually participating in sports cars? Eventually, some sports car manufacturers willing to prepare one engine which could be used [across categories]… it’s something which needs also to be addressed.”

Of course, during those halcyon noughties, when virtually every global manufacturer enjoyed a grid presence, co-operation across categories was unthinkable, for not only did they throw space-race budgets at their own programmes, but WEC and Indycar were seemingly considered mortal enemies by F1’s then-masters.

Since then, Winds of Change swept through both the FIA and F1, and never was this more in evidence than Le Mans last year, when F1 CEO Chase Carey was the designated starter of the 24 Hour classic. Could one imagine Bernie doing that? Heck, he scheduled Canada’s date such that it clashed with the endurance race!

However, F1’s incoming commercial rights holder Liberty Media is aware that F1 budgets need to be trimmed sooner rather than later – particularly if the listed entity known as FWONK wishes to disburse dividends to shareholders – and is thus more amenable to cost cuts than was previous rights holder CVC Capital Partners.

When an engine supplier – such as Mercedes AMG High Performance Powertrains – servicing an own team and two customers operates to an annual turnover of £140m and employs 570+ heads to supply three engines each to just six cars, then something is seriously awry with F1’s finances. Yes, Mercedes may argue that not all HPP’s resources are aimed at F1, but even 60 per cent of turnover runs to £100m and 350 heads.

Thus it makes enormous sense for motorsport’s top categories to seek synergies, and if that means common engine architecture for non-competing categories, then so be it; if it means a VW or Ford or Hyundai enters F1 on the basis that their sister brands or product groups are able to enter other categories off the back of such a programmes, so much the better as would be enticing Aston Martin back into F1.

The biggest prize of all would, though, be the return of Cosworth or Ilmor as independent suppliers, their participation made economically viable by sales of their engine family across three (or more) categories.

However, to ensure that common engine architecture becomes viable, F1 needs to retain (largely) the current engine formula beyond 2020, for it makes no commercial sense to ditch that, then spend gazillions on developing new architectures. After all, hybrid V6s could do the job equally well in WEC and IndyCar, and, who knows, such co-operation may result in a solution to the (lack of noise) issue…

44 comments on “The world motorsport engine: An idea whose time has come?”