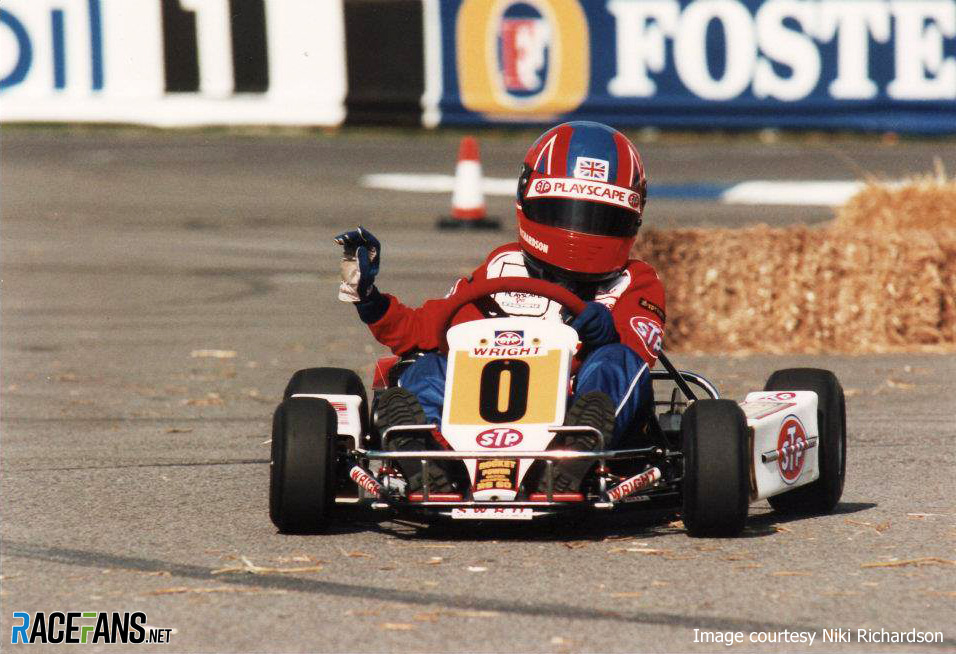 Shortly after clinching his fifth Formula 1 world championship in Mexico last week, Lewis Hamilton revealed the name of a little-known rival from his past – and the lengths he went to beat him.

Recalling his karting days near his Stevenage birthplace, Hamilton described how his father Anthony singled out the “quickest” of their rivals and used him as a reference point for his eight-year-old son.

“He would go and stand where the quickest kid was [braking],” said Hamilton, “and at the time it was a kid called Niki Richardson.”

The pair fought on-track on the mid-nineties. But while Hamilton was on a career path which eventually took him to McLaren, Formula 1 and multiple world championships, the huge cost of racing forced Richardson out of karting – after it cost his family their home.

“As an eight-year-old I looked up to Niki,” said Hamilton. “He was so quick and I was like ‘I’ve got to be better than him somehow’. My dad would go and stand where he was braking and he would move several metres down and say ‘this is where you have to brake’. No other father was doing that.”

Speaking to RaceFans in an exclusive interview, Richardson explained why few who saw Hamilton’s first go-kart races might have imagined he would grow up to become Britain’s most successful F1 driver. The pair first shared a track when Hamilton made his karting debut in 1993.

But Hamilton found the learning curve steep to begin with. “As per his interview he was spinning off a lot, causing a lot of mayhem on the circuit,” recalled Richardson, who was a championship front-runner at the time.

So was nailing those braking points really the key to Hamilton’s success? Richardson isn’t convinced. “I remember one of the other drivers’ dads went to have a word with Anthony because Lewis kept flying off at the hairpin, nearly wiping us all out,” he said.

“Lewis eventually started braking in the same place as us and the rest is history.”

Late in 1994 Hamilton began to show signs of the progress he was making. The following year Richardson moved up a category and although he kept an eye on Hamilton’s progress he admitted “I don’t know how he got so good so quickly.”

“Just out of the blue in 1995 when I moved up to juniors – and about 10 of the top 15 [did], which created a bit of a gap for the up-and-coming drivers in cadet class at the time – he started winning races.”

Hamilton and rival Mike Conway – a future IndyCar and World Endurance Championship racer – bought some of Richardson’s old engines. “Conway bought the best one,” Richardson remembers, but Hamilton took the title after Conway lost a wheel in the rain-hit final race at Shenington.

“He won the championship at the end of the season after a tight decider with Mike Conway. Which was quite out of the blue because he literally had barely won a race by the end of 1994.”

Hamilton’s breakthrough win the year before came in what he later described as “traumatic” circumstances. His victory at Kimbolton was overshadowed by a crash in which a kart flipped over, and the boys’ nine-year-old rival Daniel Spence suffered fatal injuries.

“I went to his funeral, it was just before Christmas,” said Richardson. “His advent calendar was still on the wall. It was horrible.” Hamilton accompanied Richardson to the funeral.

The pair were friends away from the track despite being rivals on it. “We went to each others’ houses and we played laser tag together,” remembers Richardson. “I stayed at his house once. He introduced me to peanut butter! It was the first time I ever tasted it and I still eat it now.”

You have to wonder whether that would have held true had they gone on racing each other much longer. Not least because, as Richardson recalls, “I must be one of the few people he’s never beaten – although of course I was older than him.”

It’s clear from our chat Richardson has not one iota of bitterness about missing out on the success his former rival went on to enjoy. His social media accounts have been buzzing since Hamilton name-checked him in Mexico, and two days later he posted the following on Facebook:

“I would like to say a huge thanks to my family for the support in those years (especially my dad, the greatest mechanic to grace a karting paddock… period), dragging the family around the country none stop for over six years and with all the tens of thousands of pounds spent, karting eventually cost us our home.

“Lastly a big thanks to all the kart manufactures that gave me works drives, Sprint Karts, Wright Karts and that year we had at ZipKart in ’94 was truly memorable and of course a huge thanks to the late John Button for literally giving me rocket engines!

“I know I didn’t make it to F1 but looking back… I think I did alright.”

40 comments on “Hamilton’s first karting rival: “I must be one of few people he’s never beaten””