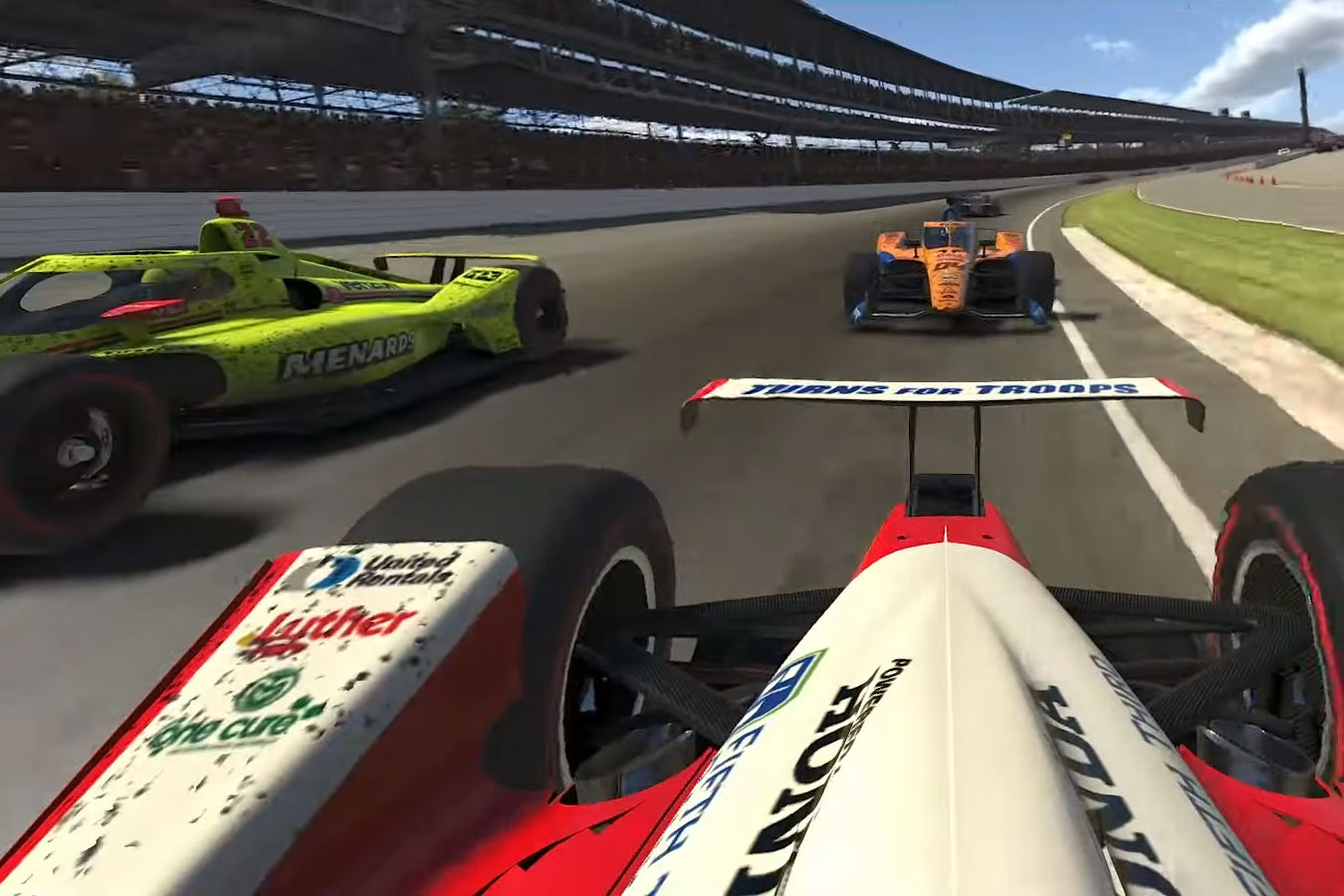 Lando Norris has revealed a netcode error contributed to the crash which put Simon Pagenaud out of last weekend’s IndyCar iRacing Challenge race, which prompted a retaliation from his rival.

Pagenaud crashed out on the 62 lap of the race after running wide to avoid tangling with Graham Rahal, who Norris was overtaking on the inside of turn one. The Penske driver then returned to the track following repairs and slowed in front of Norris, taking him out of the lead of the race.

Norris told NBC he “completely sticks with my decision of making that move” on Rahal and Pagenaud, which the latter’s race engineer criticised.

“It was such an easy manoeuvre to complete,” said Norris. “I had such an easy run out of turn one, they both washed a bit wide out of one. I didn’t have to force my way through, it was very easy. I gave them plenty of space out of one and into two.

“I really would have to brake, effectively, and lift a lot to maintain third position at that time. And they were on much older tyres, I was on fresh tyres. So it wasn’t like I was being overly aggressive or forcing my way through. I just kept it flat out and they both washed wide and I just happened to be on the inside very easily.”

Not attempting to pass when he did would have cost him a position, Norris added. “If I braked [Oliver] Askew would have overtaken me on the next straight because he had a bit of a gap behind me. So he would have had the momentum, he would have come past me, pretty much a guarantee.”

Norris believes Pagenaud crashed because of a netcode error. This refers to the technology used in online games to smooth out any gaps in the exchange of data between participants by predicting how a player is behaving – or driving – when lag occurs.

“The crash itself, how Pagenaud ended up being out of the race, was not my fault,” said Norris. “It was – and again, I hate to put it down to this – it was the fact that I’m in the UK, they’re in America and the internet [connection] between the UK and America is not lightning.

“There was a netcode basically between me and Rahal and that was the reason for Rahal going up into Pagenaud.

Norris, a long-time iRacing enthusiast, acknowledged he’s violated the game’s rules in the past. “I’ve done stupid things and I’ve been banned several times for doing stupid things or retaliating to people that have wiped me out or intentionally taken me out,” he said. “I get annoyed at doing that. I admit that I’ve made mistakes on it and I shouldn’t have done what I’ve done.”

However he said his crash in Wednesday’s Australian Supercars iRacing series, which blocked the pit lane entrance, “was nowhere near on the same level as the IndyCar stuff.”

Following Saturday’s IndyCar race Norris got in touch with Rahal. “We’re on much more even terms now of our perspectives of what happens,” he said.

He also discussed the collision with Pagenaud immediately after the event, but later discovered footage of his rival declaring he would “take Lando out” on RaceFans’ Twitter feed.

“I was even more annoyed after watching the onboard from him and his stream,” said Norris, “because of how he acted and what he said and so on. I don’t get too much into it but I think the fact he just went out of his way to do what he did was a disappointing thing. And from a driver I respect a lot and I’ve watched over the past few years in IndyCar, [that] was just a bit disappointing to see.”

“I’ve done my part and I think it’s more up to him to maybe apologise for what he did or something instead of me going to him for it,” Norris added. “I tried doing what I can to make it a less awkward situation between us. I’ve done what I can but I don’t think he’s done a lot in terms of trying to make things better, let’s say, between me and him and then also between what he did and in front of thousands of people.”

19 comments on “Norris: Pagenaud wrong to blame me for crash caused by iRacing “netcode””