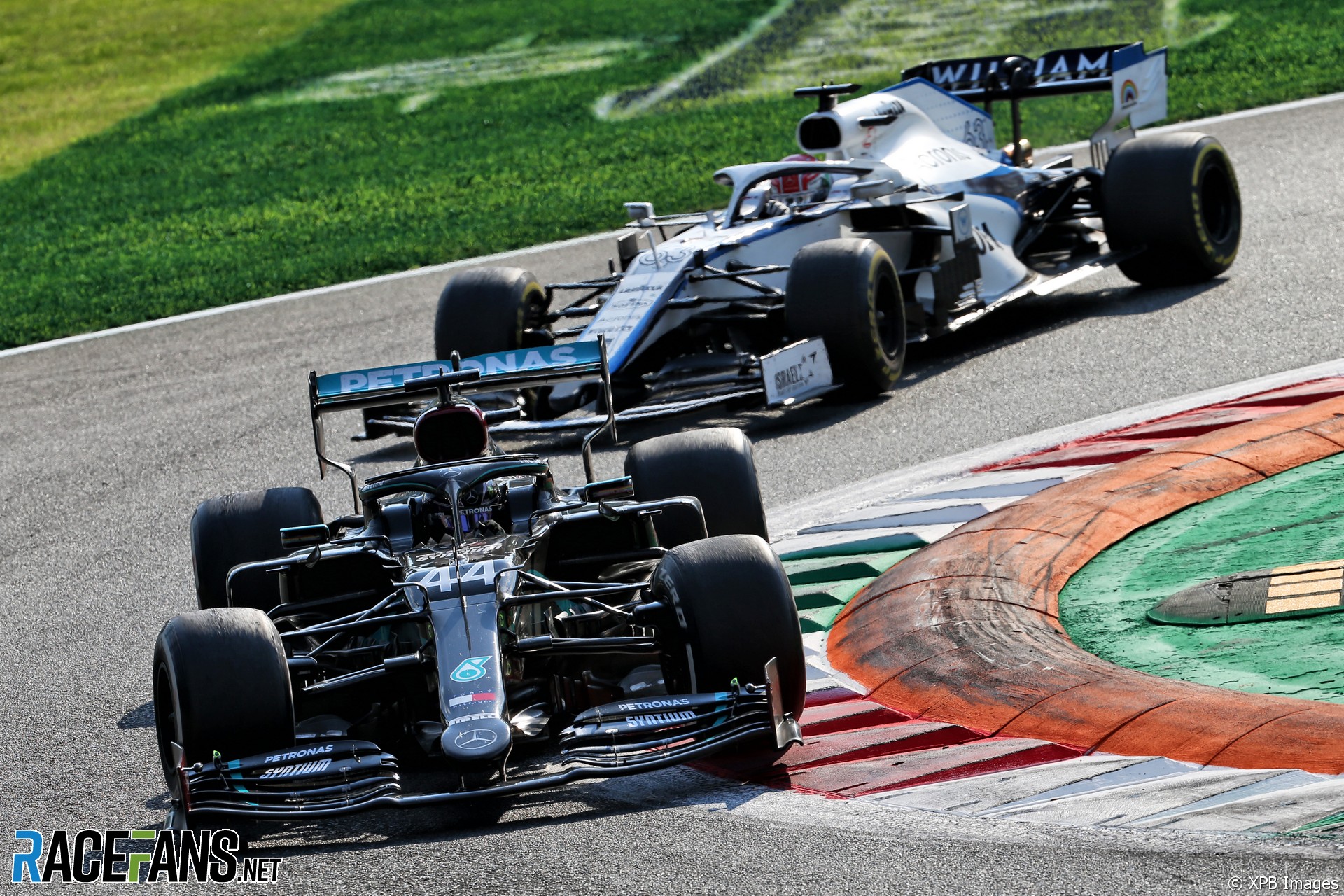 Lewis Hamilton said the decision to ban teams from using ‘quali modes’ on their engines made it harder to overtake in the Italian Grand Prix.

The Mercedes driver had to fight his way through the field after being hit with a 10-second stop-go penalty during the race. Hamilton said it was harder to make progress because he wasn’t able to ‘turn his engine up’ in the same way as was allowed before.

“We’re just in one mode, and it’s a fast mode that we would use to race on a much shorter part of the race, so the engine felt consistent,” Hamilton explained.

“The only thing is that it’s worse for racing in the sense of in the past you could move between modes and you had to manage the small amount of strong race engine mode because you only have a certain quota. It was more fun to have to manage that and manage the power and utilise it for overtaking.”

“I would imagine that’s probably why you see less overtaking then and perhaps in the past,” he added.

Despite making his way past nine cars as he recovered to seventh place, Hamilton believes the rules change has been “worse for racing”.

“That’s why I wasn’t overtaking a huge amount or had a fast pace,” he said. “When I came out [of the pits] I saw that I had a massive gap and it wasn’t really closing anywhere near as fast as I’d like. I was already on lap 20-odd by the time I came out and was sure I was going to catch them at some stage.

“But then I caught up and I couldn’t get by, so it didn’t feel great that’s for sure. And I had to use up a lot of more tyres to even catch the back of the train. I did the best I could.”

However Daniel Ricciardo, who spent the second half of his race stuck behind Hamilton’s team mate Valtteri Bottas, did not agree the ban had a significant effect on the racing. He pointed out drivers could still vary the amount of battery energy they could use to overtake.

“We still can drain the battery on the straight if we want a bit more power,” said Ricciardo. “So that doesn’t change and really that’s normally your biggest overtaking tool to use so that’s still there. So I don’t really feel much change for the dynamic of the race.”

Bottas, who finished fifth, said he doubted that having Mercedes ‘quali mode’ would have made it easier for him to gain places.

“Knowing the difference there would have been, I still doubt it,” he said. “I think the main issue was lacking speed in the corners and just not being able to follow in Lesmos and then Ascari and Parabolica.”

“I think it could be slightly part of the new regulations,” he added, “that everyone is just running a constant mode in terms of trying to save an attack, et cetera. Maybe there’s less overtaking because of that.

“But in Monza the DRS effect is quite a bit smaller because the wings [have] less drag. For me the core issue was trying to get close to the cars enough to try and overtake and get a massive tow. [It was] pretty impossible to overtake any car that I was battling today.”

At one point in the race Bottas complained “I can’t race with these settings”. Mercedes team principal Toto Wolff said this was because his car’s performance was compromised by the cooling package the team had chosen.

“Valtteri was frustrated because we were too marginal on cooling,” Wolff explained. “So it wasn’t a criticism of the power unit. It was more that we should have opened the car more and that would have given him the possibility of not needing to lift-and-coast and create a gap to the guy in front. That was the frustrating situation [when] he said ‘I can’t race’.”

However Wolff does believe the ‘quali mode’ ban has made it harder for drivers to overtake.

“We always said that [if] you create one power mode for the whole race it means that you haven’t got the extra spice to overtake, you haven’t got the extra modes that you may decide, or not, to deploy in the race to overtake. And that is valid for all the small teams as for the big teams, so I think that the race today is a consequence of that decision.”