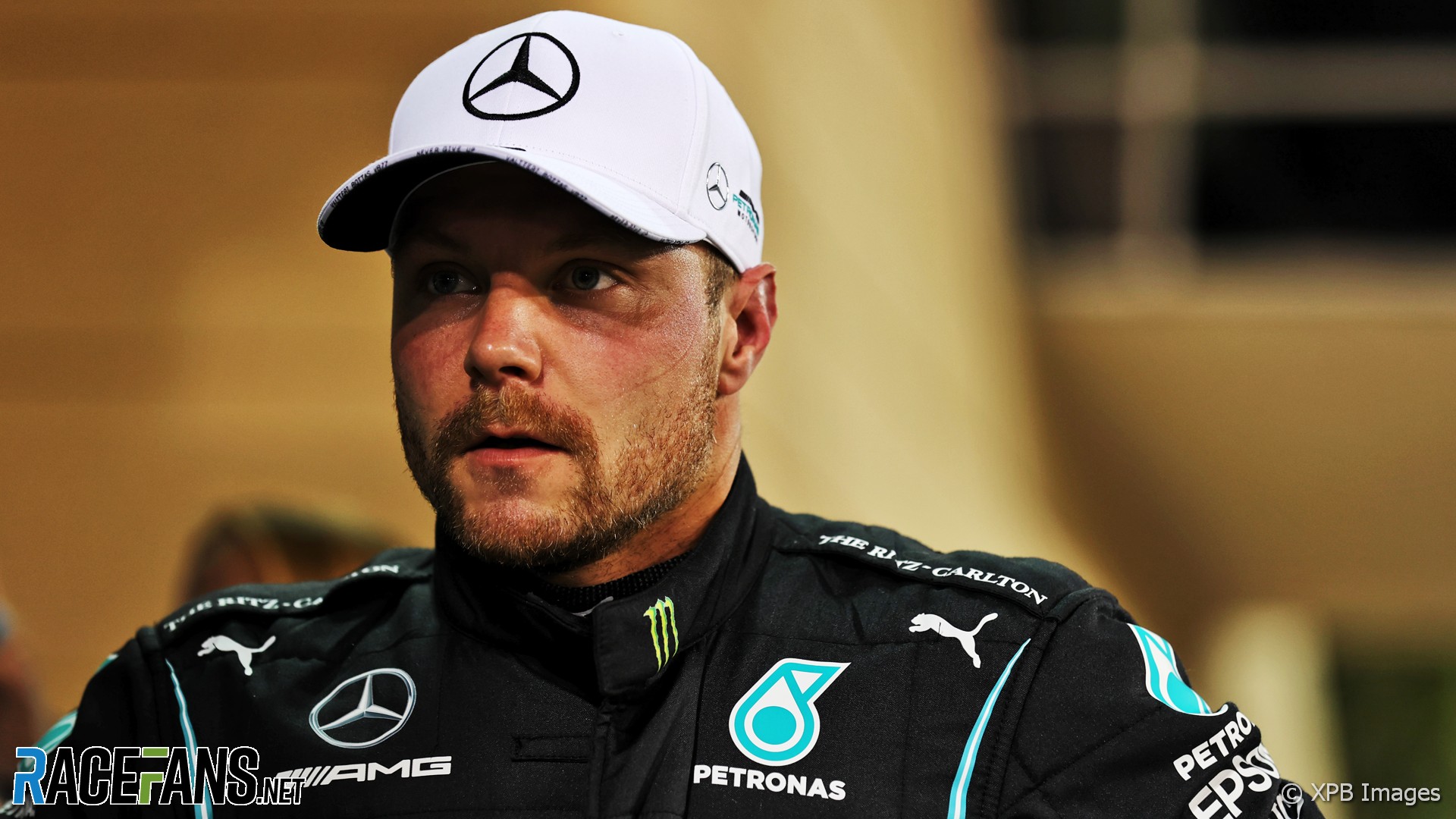 In the round-up: Valtteri Bottas criticised Mercedes’ qualifying strategy after he took third place on the grid for the Bahrain Grand Prix.

Max Verstappen and Lewis Hamilton had two new sets of the soft compound tyre to use in the final segment of qualifying, and ended up on the front row. However Bottas used an extra set in Q1 meaning he only had one run on new tyres in Q3, where he qualified third. He wasn’t pleased with the call:

First of all, the practice this afternoon was quite tricky. I didn’t really find a good balance with the car, so it made more chances for the qualifying. The first run of qualifying, actually felt OK. But the lap time wasn’t quite there, so we went again with the new tyres in Q1, which I kind of disagreed, we basically wasted a tyre set. So in Q3, I only had one run with the new tyres. It was not really an optimal qualifying for me.

But throughout the qualifying, the pace really, my confidence within the car and the feeling with the car and understanding of the wind was improving. So it was getting better and better. But I think Max was out of reach today, definitely. But still, I think even with new one new set at the end of quali, it felt like a nice lap, and decent comeback from trickier session earlier on. At least now we have two cars in top three. So I’m sure we can do something good with that.

There were penalties handed out during and after the second Formula 2 sprint race at Bahrain, with the night-time action leading to lots of drama.

Alpine Academy members Guanyu Zhou, Oscar Piastri and Christian Lundgaard fought for the win going into the final lap, with Lundgaard taking the lead into turn one only to lose it at the exit of the corner to Piastri after both dived past long-time leader Zhou.

Lundgaard had pitted during the race to serve a 10-second penalty, but as the FIA wasn’t sure it had been correctly taken he still had the penalty added to his race time and dropped to ninth. Several hours later, it was decided that Lundgaard had in fact served the penalty and he was reinstated in second place in the results. That pushed Carlin’s Jehan Daruvala off the bottom step of the podium, and he is under investigation for an alleged unsafe release in the pit lane.

In addition to that, penalties were handed to Juri Vips for a Virtual Safety Car infringement and to Felipe Drugovich for spinning Liam Lawson.

Formula E has announced that the next two events of its 2020-21 season in Rome and Valencia will now feature two races each.

The world championship began with two races on the streets of Riyadh in February, and it heads to Rome for rounds three and four on April 10th-11th. The trip to Italy was originally supposed to include a single Rome EPrix as in previous years.

Valencia’s permanent circuit hosts FE two weeks later on April 24th-25th, and that too now includes two rounds. With Monaco, Marrakesh and the Santiago double-header all confirmed too, it means the season is already up to 10 races before the six events that are on the calendar but yet to have their dates announced have their places on the schedule finalised.

Head up and on to Race 2. Not ideal to throw away 2 races like this but it is what it is for now 🙃

Maybe instead of cooking up this dog's breakfast of a race weekend format #F2 should have spent its off-season fixing the damn cars.

Seems like you're pretty into my butt? Next time just look, don't touch 😅 @lundgaardoff

A drive to survive: How Liberty Media used Netflix and esports to win a new generation of fans and safeguard the future of F1 (City AM)

F1’s new owners arrived with a mission: to attract new fans to a sporting property that was unhealthily white, male and middle-aged. Liberty planned to do that by tapping digital resources neglected under the long reign of Bernie Ecclestone.

Juju Noda withdraws from opening US F4 round (Formula Scout)

Driving for Jay Howard Driver Development, Noda was fastest in free practice on Friday ahead of the season-opening event but did not take part in qualifying later that day. Shortly before the first race was due to get underway, a statement issued by Noda Racing confirmed it had withdrawn the 15-year-old driver from the opening round.

The off-season has been an interesting time. I have been focusing on staying fit and building my strength for the year ahead. I’ve been in the simulator a lot, helping develop the RB16B (which is the new 2021 Red Bull Racing Honda F1 car, for those of you non-nerdy F1 fans).

Lance Stroll is humming and drumming. He’s tapping his fingertips on the table, rhythmically racking his brain for an answer to my question. There’s a pause, the drumming stops and he offers up the sweetest, sincerest — and most profoundly Canadian answer I could have hoped for; 'Maple syrup'.

The first qualifying session of the F1 season answered some of the questions and confirmed some of the predictions from pre-season testing, but also threw up some surprises. The battle up front between Mercedes and Red Bull got a lot of attention, but as Bonno (presumably no relation to Hamilton’s race engineer) pointed out, there were some interesting performances further back too.

Clearly, the Red Bull pace is real. I don’t really believe in the concept of “sandbagging”, I think it’s down to different testing scenarios, but Mercedes evidently have a pace issue. Same with Aston, that car does not look comfortable to drive and I think Stroll actually did a great job getting into Q3. It looks bad for Vettel, but his lap went through two consecutive yellow sectors, it’s hard to know how fast he really can be.

AlphaTauri clearly best of the rest, and Ferrari not too far behind. Sainz is right on the heels of Leclerc which is great for the team.
Bonno

15 comments on “Bottas disagreed with qualifying strategy: “We wasted a tyre set””