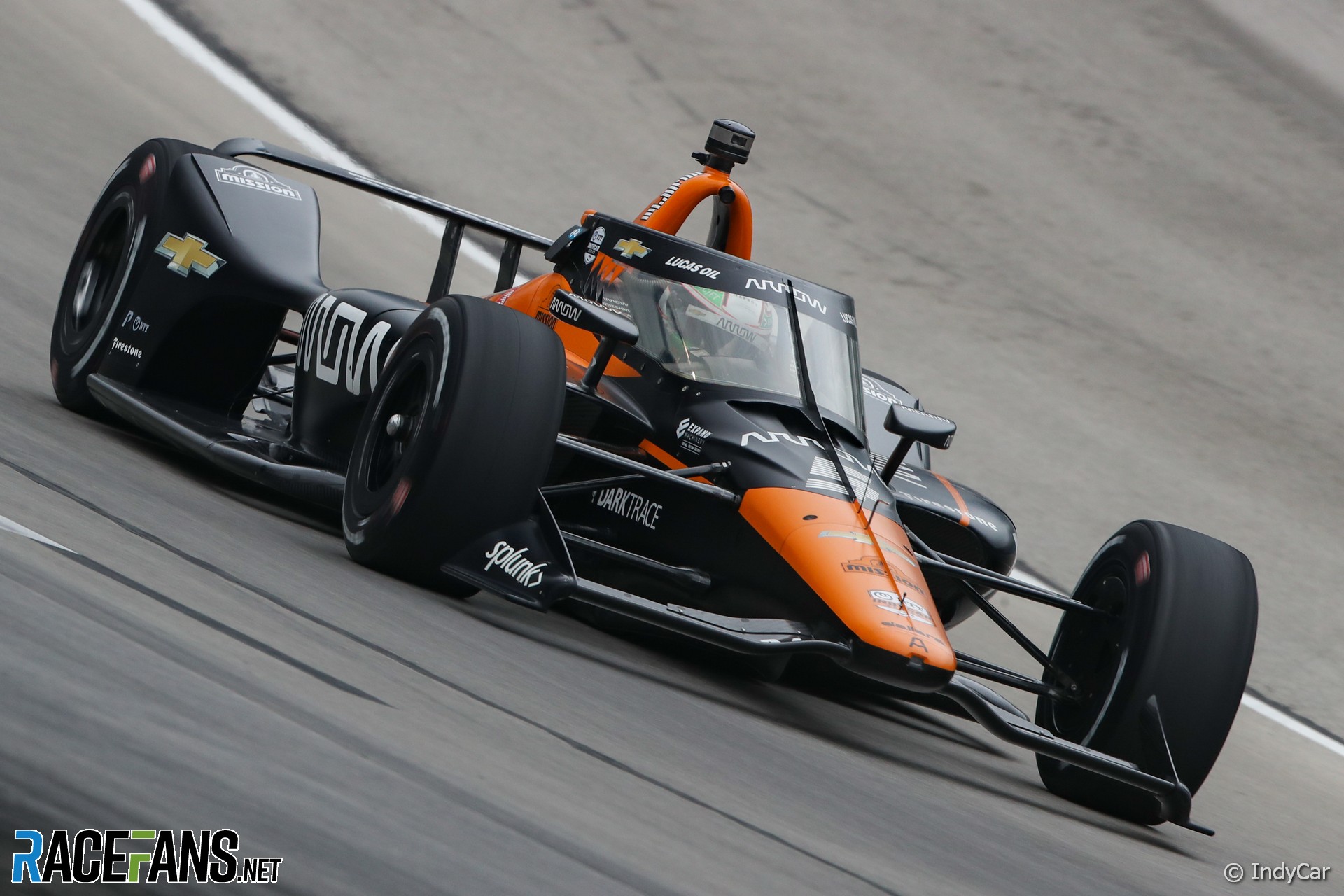 McLaren SP driver Patricio O’Ward has clinched his first IndyCar victory – and with it the chance to test their Formula 1 car later this year.

McLaren Racing CEO Zak Brown told O’Ward last month he will drive for their F1 team in the end-of-season rookies’ test at Yas Marina if he won an IndyCar race for them this year.

The start of the race was marred by a huge crash involving six cars, triggered by Pietro Fittipaldi. Sebastien Bourdais – who was also taken out of yesterday’s race – Alexander Rossi, Ed Jones, Conor Daly and Dalton Kellett were all claimed by the carnage, fortunately without serious injury.

After the restart the race initially ran along similar lines to yesterday. Scott Dixon took control while few drivers behind him dared to risk a pass, as the outer line on the steeply banked turns proved too slippery for IndyCars to touch.

The complexion of the race changed halfway through when a second caution period was triggered by Jack Harvey’s retirement. The Meyer Shank racer, who was running another strong race inside the top five, was sidelined with a suspected right-rear bearing failure, which looked similar to that which claimed Colton Herta yesterday.

The action resumed on lap 128 of the extended second race, with drivers able to complete the remaining 120 laps if they nursed their fuel loads. This led to a stint of cautious fuel management in which Graham Rahal briefly slipped past Dixon to lead, before the positions were reversed again.

O’Ward was also in the mix. After a daring earlier attempt to pass Power, resulting in a breathtaking save when he touched the apron at the foot of the steep banking, he got the job done at the restart. He also temporarily got ahead of Rahal, before dropping back to third.

Crucially, O’Ward eked his fuel out a lap longer than the leaders. Dixon and Rahal came in together on lap 187 and left even closer together, Rahal passing uncomfortably near to Dixon’s crew as he rejoined. Back on track, the RLL driver swiftly passed yesterday’s winner, but O’Ward’s extra lap of running light allowed him to jump the pair of them.

He was then handed a slice of luck by none other than his team mate. Felix Rosenqvist’s car shed its right-rear wheel, causing a third and final caution period. Fuel mileage was no longer a concern for O’Ward, but the interruption allowed Takuma Sato into the lead, followed by Josef Newgarden.

Newgarden and O’Ward passed Sato immediately after the restart. The McLaren SP driver then tracked his rival for 23 laps, before moving in for the kill. The rookie proved highly effective against the twice-champion, sizing him up on the outside before effortlessly diving down the inside.

He reeled off the final 24 laps untroubled by his pursuers, and reached the line 1.2 seconds clear to score his first IndyCar victory at his 26th attempt.

Second place for Newgarden was a useful result in the championship, though he remains yet to win a race this year. Points leader Dixon came in fourth behind Rahal.

Herta took fifth after diving past Simon Pagenaud in a move which had repercussions for Power – he understeered wide onto the slippery banking, where an inevitable brush with the wall awaited. He finished 13th.

Palou slipped from second to seventh at the flag. Yesterday’s runner-up Scott McLaughlin came in eighth, with Rinus VeeKay less than a tenth of a second behind. Ryan Hunter-Reay completed the top 10 – the first time this year the 2012 champion has finished that high.

A confirmation of O’Ward’s reward came quickly from McLaren’s top brass. “A deal’s a deal” Brown declared on social media moments after the chequered flag fell. “What a win! See you in Abu Dhabi later this year!”