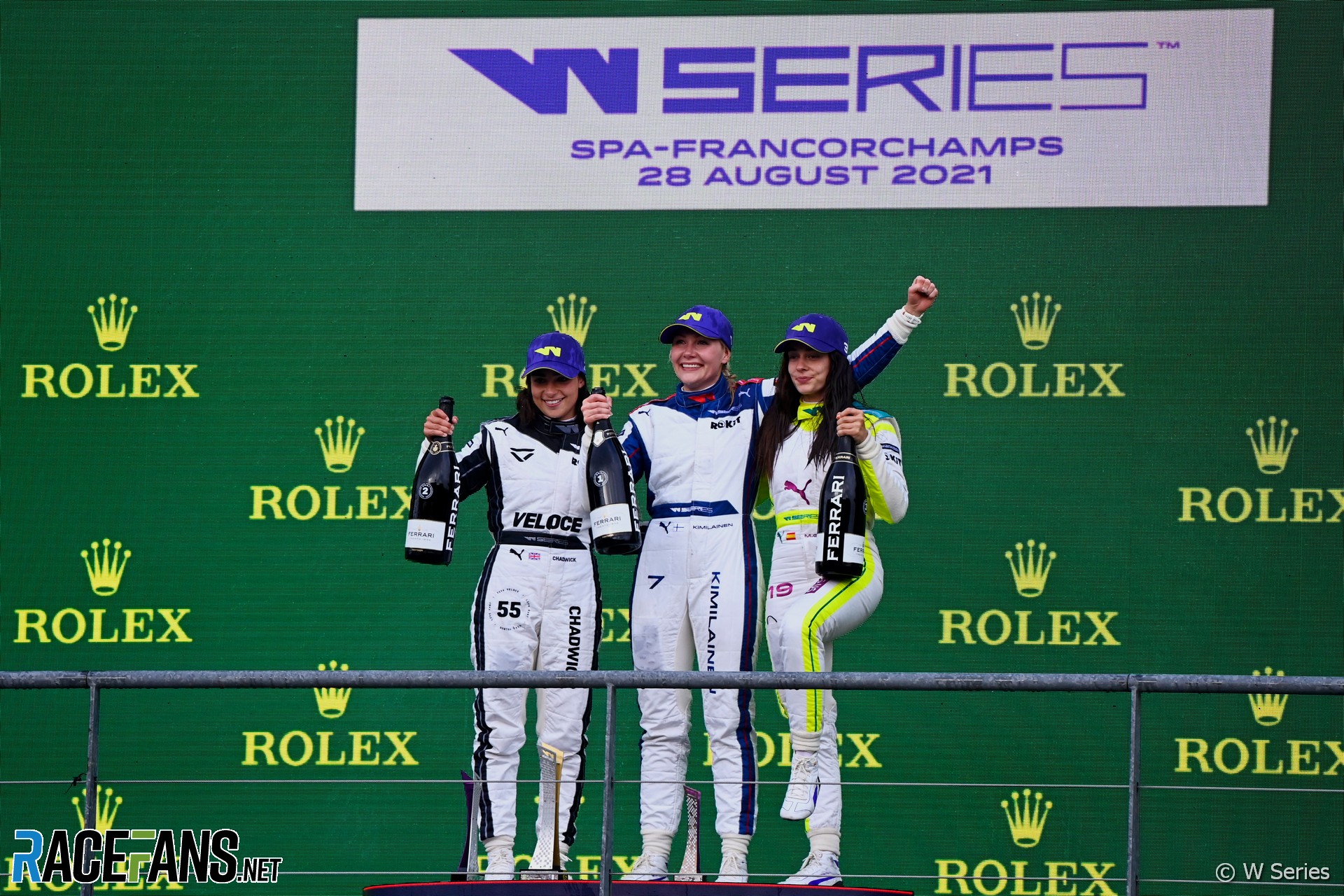 Four of the drivers involved in the crash were able to start the race: Fabienne Wohlwend, Abbie Eaton, Sarah Moore and Belen Garcia started from the back of the 16-car grid, with only Beitske Visser and Ayla Agren missing from the field. Gosia Rdest took over from Ira Sidorkova, following the young Russian driver’s positive Covid-19 test.

The first laps of the race were run behind Safety Car on a wet but drying track. “Behind Jamie, I can’t even see her rain light – there’s so much spray” said Powell, on the third tour. Nonetheless, the Safety Car came in on the following lap and the race started with 17 of the 30 minutes remaining.

Chadwick got away at the restart, drawing out several car lengths of lead ahead of Powell into turn one. Caitlin Wood and Kimilainen duelled up the Kemmel Straight, going three-wide with Marta Garcia despite appalling visibility. Wood and Kimilainen continued to battle around Les Combes and by turn nine Kikmilainen had the advantage.

Garcia and Wood continued fighting, taking almost the whole middle section of the track side-by-side. Garcia had fourth place across the line but both stayed close onto lap two, while Chadwick and Powell moved up the road.

Wolhwend had made an excellent start before going wide through turn nine on the second lap, feeding her back several places.

Powell was caught by Kimilainen with nine minutes to go, Kimilainen drawing up alongside her through Blanchimont and taking second place while Chadwick continued to comfortably head up the road.

“I’ve got no grip whatsoever, nothing,” said Powell on the radio immediately after Kimilainen’s overtake, as fourth-placed Garcia began to catch them both.

Powell found herself in a serious battle with Garcia on the following lap, the two side-by-side through Stavelot, but Powell was able to hold on through Blanchimont and draw out a further gap at the start of the next tour.

Kimilainen, meanwhile, had caught Chadwick – fighting through Pouhon Kimilainen seemed to be driving a different car, setting lap times more than three and a half seconds faster than Chadwick and able to easily power past for the lead.

Garcia was able to get close to Powell again, this time making the pass through Stavelot work. Powell fought back and at one point reclaimed the place but seemed unable to make a pass stick.

Kimilainen crossed the line just before the time ticked down to zero, meaning there were two more laps after the 30 minute race time. Around a track like Spa, that increased the distance by a considerable margin, but Kimilainen led the final two laps home at the same pace she’d taken the rest of the race.

Kimilainen was joined on the podium by Chadwick, who extends her championship lead with a second-place finish and Garcia, who held off Powell to take third.

Wohlwend, despite her earlier error, moved up into seventh place to recover from yesterday’s crash by scoring a haul of points and Eaton also made it into the top ten, from their back-of-grid start.