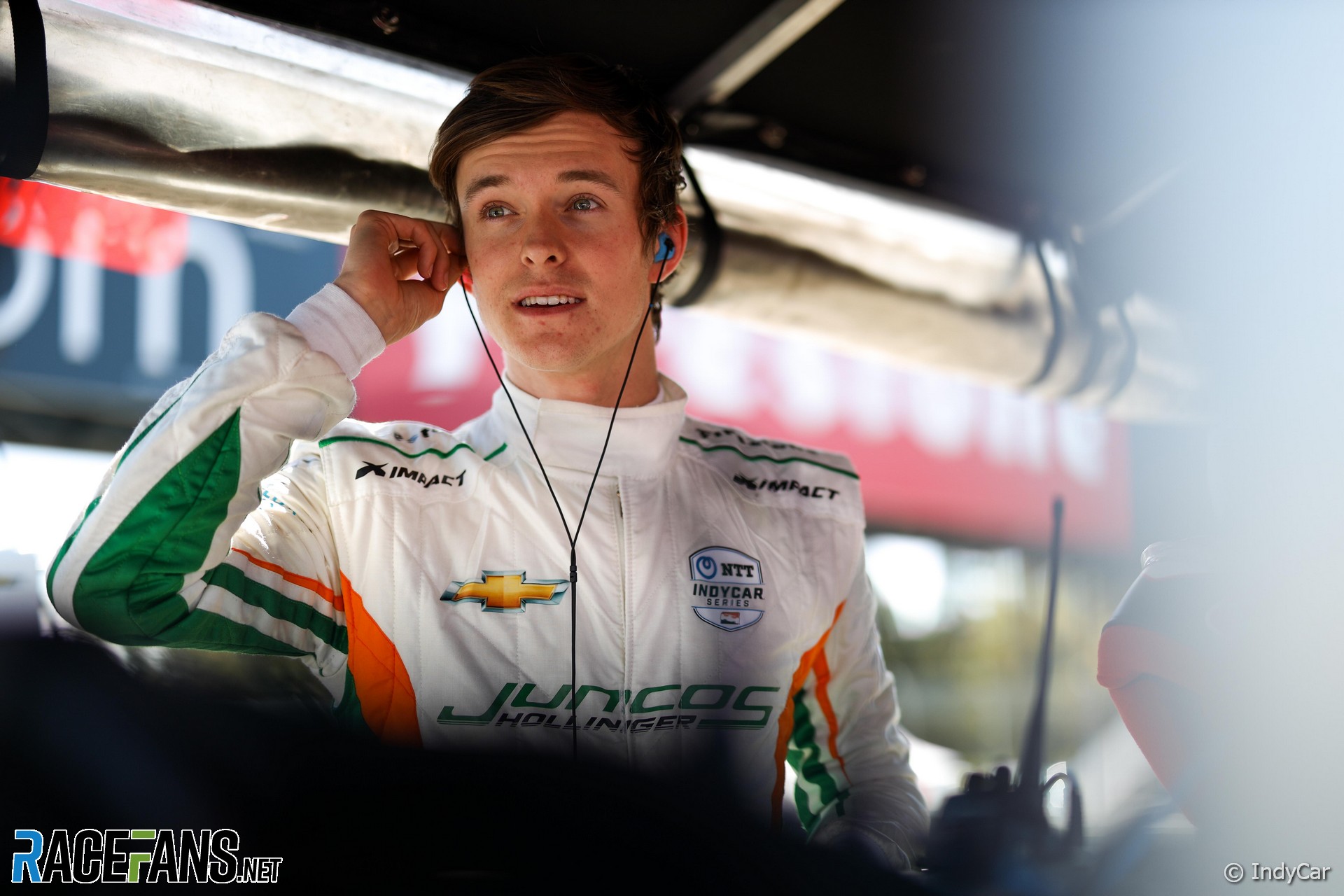 Callum Ilott sees an opportunity to forge a long-term career in IndyCar racing after committing to a full-time drive in the series with a single-car team.

Ferrari recently described their academy member as being on a “gap year” in the United States. However the 23-year-old said drivers such as champions Scott Dixon and Will Power show it’s possible to have a long and successful career in the series.

Ilott has relocated to the United States after a year racing GT cars in the World Endurance Championship. That followed his runner-up finish in Formula 2 to Mick Schumacher in 2020.

Two Friday practice runs for Alfa Romeo last year as part of his reserve driver duties saw him back in a single-seater, before Ilott entered the final three rounds of the IndyCar season with Juncos Hollinger, fielding a rapidly-put-together team. Now he has an opportunity to race his first full IndyCar season with the team.

“It’s a great opportunity, number one, for me,” said Ilott, who moved to Indianapolis this week. “As a team, I think we’ve put in a lot of effort over the winter to try and achieve as much as possible going into this season.”

The outfit which put Ilott on the grid at Portland, Laguna Seca and Long Beach last year has undergone a major transformation during the off season. “We’ve had a lot [of changes] from the ground up, really,” said Ilott. “Only a couple of guys stayed from the three races that we did.

Thanks has included absorbing several staff from Carlin’s IndyCar operation, bringing vital experience to the squad. “I think given the preparations that we’ve been able to do and without the rush of the races from last year, I think we can do an amazing job,” said Ilott. “It’s a big change but a lot of preparation, a lot going into it.”

With a dozen tracks on the schedule he hasn’t raced at yet – including St Petersburg, scene of next month’s season opener – not having access to a professional simulator is a disadvantage, but Ilott is able to make useful progress at home. “I can actually now use a home simulator with iRacing and stuff to to kind of learn the tracks,” he said, “so that was what I did at the end of the winter. I haven’t had access to, shall we say, a big simulator yet, we will during this season, hopefully.”

He is also preparing for the different physical demands of IndyCar racing where the cornering speeds are generally lower but the tracks are bumpier and more punishing. “It’s a bit different to the F1 style because that was just purely neck and it’s not as necessary here,” he explains. “But the arms and the shoulders is quite important. You’re always hustling this car and the races are long so it’s not easy.”

Dixon recently opined that the current generation of IndyCars are too much like junior category machines. But Ilott, with his recent experience of F2 cars which are also built by Dallara, doesn’t quite see it that way, noting the competition for victories in IndyCar is much closer than, for example, Formula 1.

“I don’t think speed is the the deciding factor of what is a good formula,” he says. “At the end of the day, the racing and the level of competition is what is important. The fact that almost anyone can win one of these races is important, the fact that you can come through the field is important and that’s what makes it a spectacle.

“When you start to add downforce and start to make these cars as quick as possible, it can ruin the racing. You can get almost a very one-sided result – as we’ve seen in Formula 1 – which some people enjoy, most people don’t. Maybe from the driving side, it becomes quite rough around the edges, sliding it around, which makes it very individual to some of the other stuff I’ve driven.”

“I don’t look at it as a junior formula,” Ilott continued. “I can tell some things are quite similar to the Formula 2 in a base chassis feeling, in the steering feeling. But then because of the Firestone tyres and the power that you have, it turns out to be quite different.”

Ilott described driving an IndyCar as “a different beast to what I’m used to in Europe” with “almost a rally-esque type kind of feeling sliding through the corners.

Though coming so close to a securing an F1 seat and missing out can only be a disappointment, Ilott says he is “open” about the new opportunity before him. “Last year I was doing the test and reserve stuff in F1 with Ferrari and Alfa Romeo and I was racing in GTs, I experienced Le Mans and then I ended up coming here at the end of the year. For me, that was like an experimentation.

“At the end, I chose to come to IndyCar because I enjoy it. But for me, given the potential of this championship and the hybrid [power unit] coming in next year, I really see a big growth of this championship. So honestly, I’m just looking forward to it and going to try and enjoy it.

“Honestly, if it really works for me and I’m enjoying it, I’m really happy to stay out here. You can see with Scott, with Will Power, there’s a long career that you can build out here and a very good one as well. So I’m open to everything and honestly, I hope it goes that direction because it’s a good lifestyle here.”