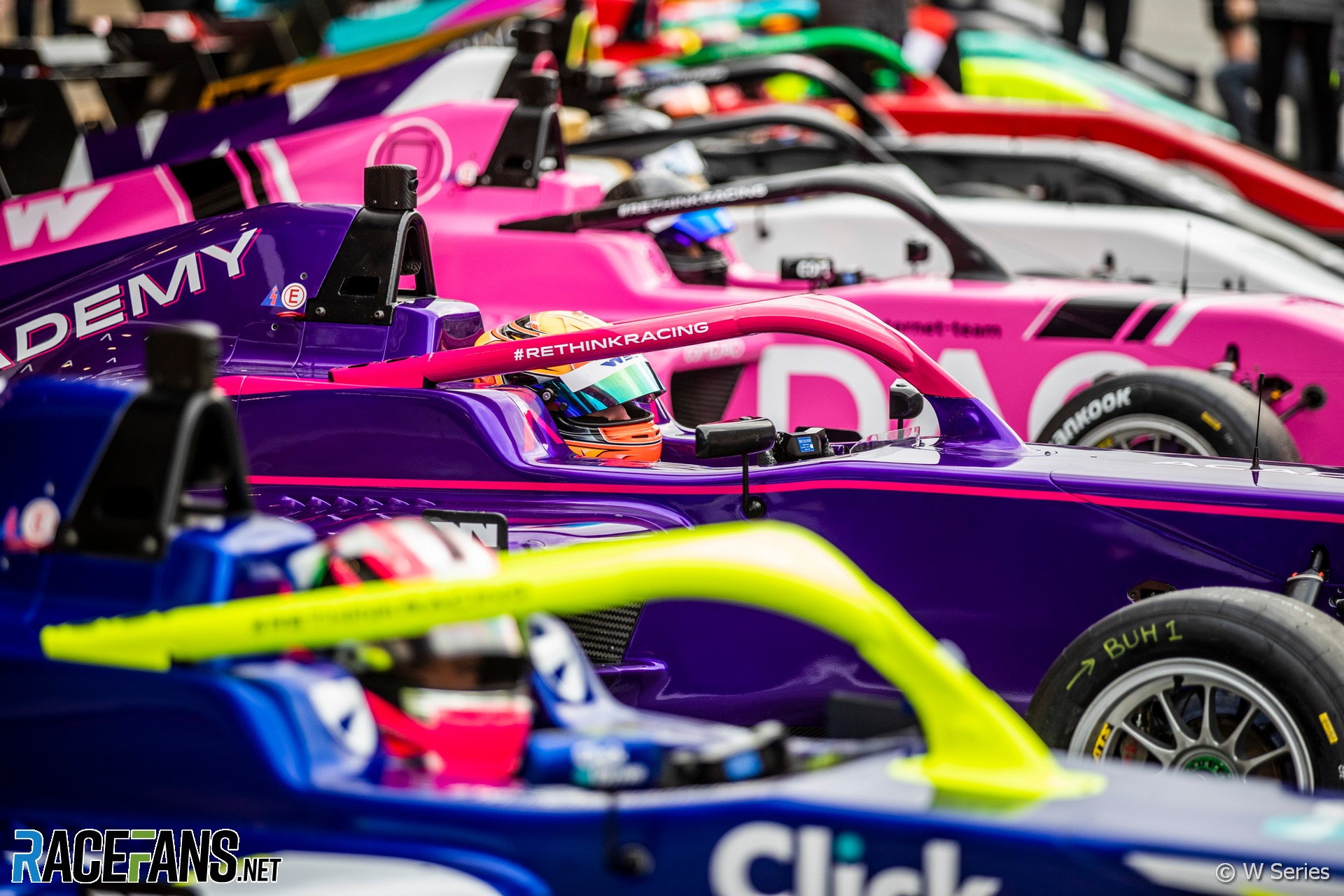 W Series will have the honour of being the first championship to race on the new Miami International Autodrome when the all-female junior series begins its third season this weekend.

In retrospect, 2019 was a very difficult year for the new championship to launch. After that first, six-race season W Series was forced to put racing on hold for a year when 2020’s Covid-19 pandemic hit.

It returned to racing last year, now elevated to the status of F1 support series. But the pandemic continued to have an effect and as the cancellations and postponements of grands prix meant the series was forced to rearrange or cancel some rounds.

But for its third season W Series will embark on its longest-ever championship. It also boasts a refreshed line-up of young talent looking to progress up the motorsport ladder.

They will have to measure themselves against Jamie Chadwick, who returns to the series to defend the two titles she has won so far. While she strives for a third crown which would underline her status as the top female single seater racer, for the others she represents a benchmark they will all want to beat.

Alongside several notable additions to the driving roster from last year many of W Series most famous names are still there. Beitske Visser, Alice Powell and Emma Kimilainen – the drivers who provided the strongest opposition to Chadwick in W Series’ first two seasons – are also continuing.

Using a new selection process, including a test in Arizona this February, W Series looked to find candidates from backgrounds it has drawn few drivers from so far, and also to bring down the average age of its competitors.

“When we set up a series in 2019 we invited applicants from all over the world,” explained W Series CEO Catherine Bond-Muir during the Arizona test. “We had probably 100 fairly serious applicants and we took 68 of those applicants to do a four-day test in Austria.

“We feel as though we’re beyond that now and what we want to do is find the drivers who are actually doing really interesting stuff. Inevitably, people are reaching out to us the whole time and trying to sell individual drivers. So I know that there was one driver who we hadn’t initially chosen and that driver actually had a lot of very influential friends because they were calling us up saying ‘actually, you should give her a second look.'”

That driver, Bianca Bustamante, was selected after the Arizona test and will become the first Filipino to compete in W Series. Juju Noda is another newcomer and the youngest-ever competitor, having turned 16 during the Arizona test, and is already a known name being the daughter of three-time F1 race starter Hideki Noda.

The pivot towards youth is intentional, says Bond Muir. “What we’ve got to be is a series that is finding young talent, and that is why we have purposefully gone for a much younger profile because if we can get the really good ones who are naturally incredibly quick, what is happening is that people are all over the world is starting to look at W Series.

“If they can stay with us for two or three years or however long, if they are sufficiently quick, they are going to be picked up by other series, because that is what is happening already.”

The Arizona test fell before Chadwick, unable to secure an FIA Formula 3 seat, announced her return. F3 CEO Bruno Michel told RaceFans last month he believed there had been no barriers to and several teams interested in signing her, while Chadwick blamed lack of funds. By necessity of being a junior series, W Series will have to demonstrate its top drivers can move up to the higher echelons to sustain its influx of new talent.

Nevertheless, some returnees are keen to start afresh. Jessica Hawkins is going into her third year in W Series off the back of a win in her first weekend of UK TCR.

“Obviously a TCR car and a W Series car are absolutely nothing whatsoever,” she told RaceFans, “so I can’t really take much in the driving way. But what [the win] has done is given me a boat load of confidence going into it, which is probably exactly what I need.”

Hawkins, who is also an ambassador for the Aston Martin F1 Team, placed 11th in last year’s championship with a best finish of fifth at Zandvoort. “It’s no secret that W Series hadn’t been for me what I’d hoped it to be last year, results-wise,” she says. “But I come this year with a new me, a fresh outlook, a different attitude and we go again.”

This year’s line-up also features Abbi Pulling in a full-time race seat, after strong performances last year while standing in as a reserve driver. Pulling is an Alpine Academy associate driver, hoping to progress into a full academy role if she can show the same potential this season.

Abbie Eaton was the last drive confirmed to the grid, returning after suffering spinal injuries during the final round at COTA last year which required a long recovery. Ayla Agren, who drove during the 2021 season, will act as reserve in 2022.

The 2022 season opens and closes on double-header weekends, after the success of the season-closing weekend at the 2021 US Grand Prix.

Beginning in Miami, there are three races in May, three in July and then a very sizeable gap in the calendar to reach the four races in a hectic November finale. While, arguably, it gives drivers the opportunity to take up racing in other series, other junior series have seen their drivers struggle with unfamiliarity after long gaps and especially with W Series’ relatively short running per race weekend drivers will need to find ways to keep their skills sharp.

W Series’ calendar follows Formula 1’s, in the sense of being a support race to grands prix and so competes for space with Formula 2 and F3. At both Barcelona and Silverstone all three series will be running, creating serious risk of missed or delayed sessions if there are any issues.

However, W Series has also worked out a way to manage its fly-aways without the cost of air freight, meaning it can accompany F1 further afield. In order to accommodate the logistics of the calendar it will borrow the identical chassis used by New Zealand’s Toyota Racing Series, meaning a switch from Alfa Romeo to Toyota power at the Barcelona and Suzuka rounds.

Browse all other motorsport articles