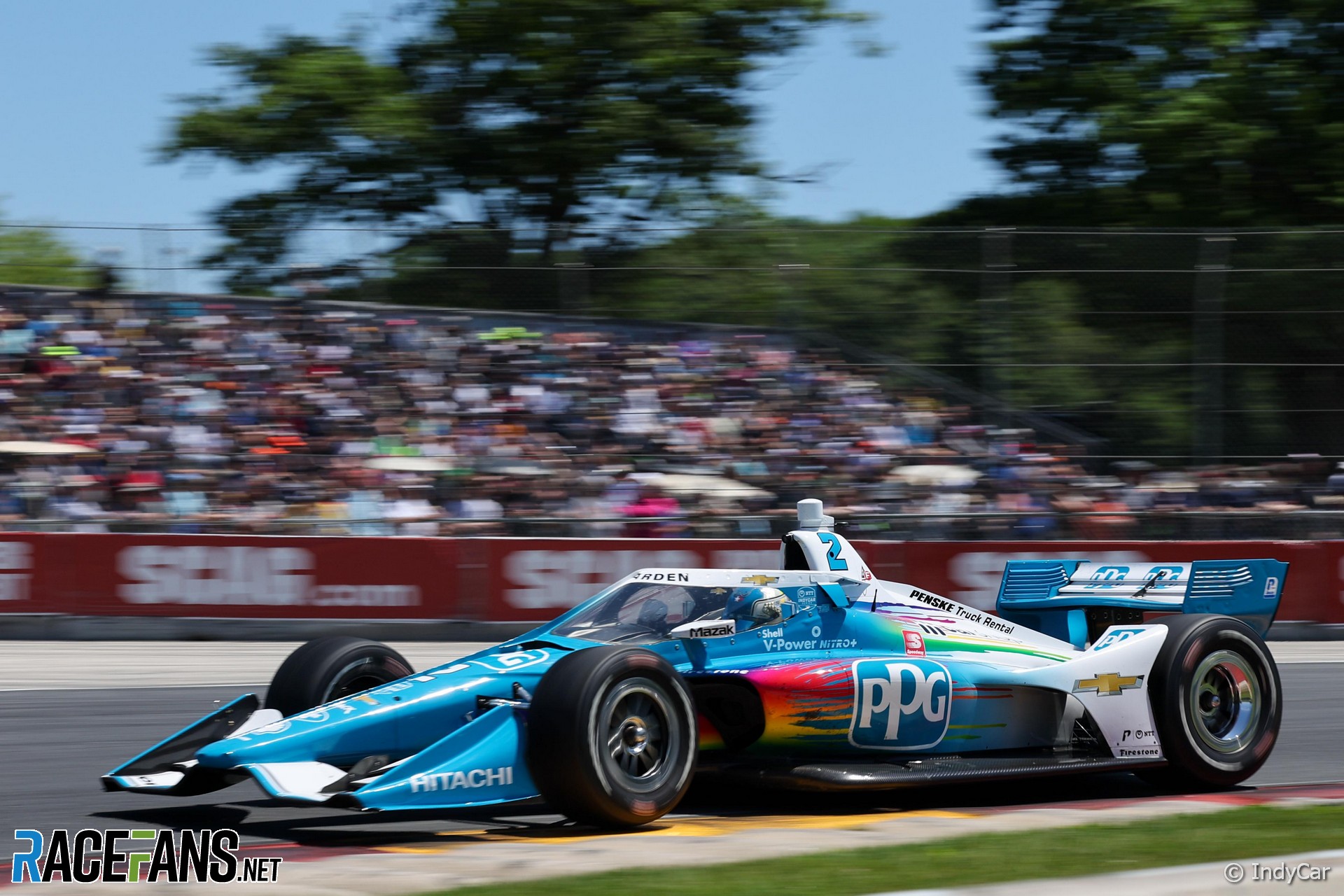 Josef Newgarden grabbed his third win of the season in Road America and claimed a million-dollar bonus as he did.

The first 10 laps at the Road America circuit were marred by three incidents, two of which had serious implications in the IndyCar Series points table. Not so much the first one, where Jimmie Johnson was run out of road and into the gravel in turn three shortly after the start.

Then just one lap into the restart Ganassi team mates Álex Palou and Marcus Ericsson made contact when the latter lunged up the inside at turn five. The contact broke Palou’s left-front suspension and put him out of contention.

Palou eventually returned to the race to run some more laps, before ultimately retiring after 36 laps. The reigning IndyCar champion was furious with his Indianapolis 500-winning team mate after the incident.

On the ensuing restart, rookie Devlin DeFrancesco clattered into the back of championship leader Will Power as they plunged downhill into turn five. DeFrancesco was given a stop-go penalty for avoidable contact, which was little consolation for Power, whose points lead vanished as a consequence. Power stayed on the lead lap after getting a new nose assembly, but he finished down in 19th position, and nudged DeFrancesco on the cool-down lap.

Once the race truly got going, pole-winner Alexander Rossi led until his first pit stop on lap 14, where Newgarden followed him in. A fast pit stop for Newgarden helped him take the net lead ahead of Rossi. Felix Rosenqvist, who made a pit stop on lap nine, cycled to the front of the field, and stretched his fuel tank out to lap 25 before pitting.

From there, Newgarden resumed with a lead of five seconds over Rossi, which held up after the third and final round of green-flag pit stops.

But with eight laps to go, Newgarden’s lead, which was up to three seconds, completely vanished when yet another title contender, Pato O’Ward, suffered an engine failure inside the top 10. The anticipation was building to a restart with five laps left – then Hélio Castroneves spun out before taking the green flag, bringing out the fifth full-course caution of the race and reducing the restart to just a three-lap sprint.

When the time came to make a perfect restart, Newgarden launched into the home straight and started breaking away, while Ericsson slipstreamed past Rossi into second place, gaining more championship points for his manoeuvre.

But Newgarden was the story of the day, taking the victory and the coveted million dollar bonus prize for winning IndyCar races on all three disciplines of racing: Ovals, temporary street circuits, and permanent road courses.

Ericsson finished 3.3 seconds back in second, the result restoring him to the championship lead after eight races, with a 27-point lead ahead of Power. Newgarden moves up to third in the points, a further five points behind Power in the table.

Rossi’s run of top-five finishes continued with third, but his three-year winless drought continues. He finished ahead of Andretti Autosport team mates Romain Grosjean and Colton Herta, who swapped places after the final restart, Grosjean putting two wheels on the grass as he clung to his position.

A photo-finish for sixth place saw Rosenqvist edge out Scott McLaughlin in seventh. Graham Rahal – who gained 14 positions from the start of the race – came eighth. Scott Dixon finished ninth ahead of rookies Christian Lundgaard and Callum Ilott, the latter taking 11th in his first race since returning from injury.

Today’s race marked the first time that two women have started an IndyCar race since 2015. Simona de Silvestro and Paretta Autosport finished on the lead lap in 21st, ahead of Castroneves, Johnson, and Tatiana Calderón, who was 25th in her first visit to Road America.

The series will take a three-week break before returning for the Grand Prix of Mid-Ohio on July 3rd.