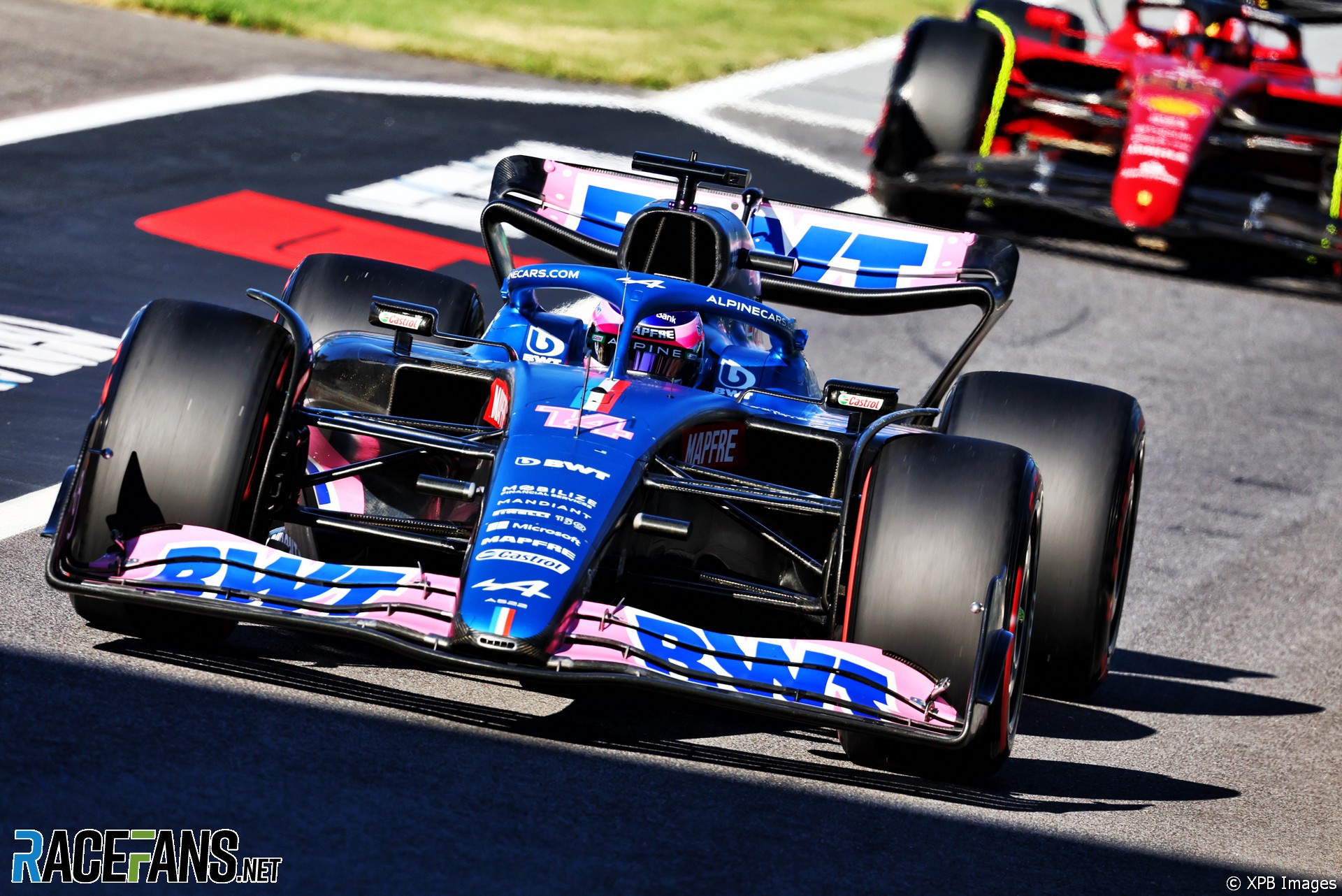 Fernando Alonso left the Red Bull Ring with one of the most hard-earned points in his career of almost record-breaking length.

The Alpine driver’s weekend began to go awry when his car refused to fire up before the start of Saturday’s sprint race. That condemned him to line up on the back row of the grid.

His A522 was coaxed into life for the grand prix, however. There it spent the opening laps at the back of a queue of cars which Alonso was clearly capable of lapping faster than.

Alonso demonstrated his characteristically terrific race pace when he had the chance to. Unfortunately his team found it difficult to seize those opportunities, and Alonso made his feelings clear when he emerged immediately behind a rival after one pit stop.

That pace put him on course for a finish well inside the top 10, potentially even immediately behind team mate Esteban Ocon, who had started sixth and finished a season-best fifth. But Alonso was dealt another blow when a wheel worked loose after what should have been his final pit stop, forcing him back in.

Nonetheless he displayed impressive tenacity by fighting back into the top 10 again, and snatching the final point from Valtteri Bottas as they began their last lap. Even so, it was a race which left you wondering where he might have finished had he started where he should have done.

From 19th on the grid, Alonso immediately picked off Sebastian Vettel at the start. However he then found himself stuck behind Nicholas Latifi, and unable to get past the Williams.

Alonso claimed Latifi was repeatedly exceeding track limits. However the stewards did not agree the Williams driver was running wide as often as his pursuer claimed. At the point Alonso said Latifi had already gone off the confines of the track five times, but the stewards had only recorded him of doing so once, on lap 10.

However, Latifi came into the pits two laps later and Alonso’s slow progress up the order continued.

Alonso quickly caught Zhou Guanyu, who was behind Yuki Tsunoda. His lap times rose by over six tenths of a second as he sat behind them.

On lap 15 Ocon pitted from third place as Alpine tried to maximise his chances of out-running the pursuing Mercedes. This was bad news for Alonso: Ocon emerged behind him and Alpine soon asked him to make way for his team mate.

It got worse for Alonso as he now fell into the clutches of Ocon’s pursuers. Kevin Magnussen, Lando Norris and Mick Schumacher all had fresher tyres on and passed Alonso easily, costing him more time. Meanwhile Ocon had cleared Zhou and Tsunoda, and was catching Lance Stroll ahead.

Alonso exclaimed in frustration as he saw how much time he had lost to the cars he was racing against.

Alpine chose this time to pit Alonso, one lap after Tsunoda ahead of him. It got him ahead of Zhou, but he was disappointed in the timing of the stop compared to the AlphaTauri. Alonso’s criticism of his team was played on the world television broadcast.

With a new set of tyres on, Alonso passed Tsunoda on lap 32 and reeled off a series of quick laps. That brought him onto the tail of Stroll, who he passed on lap 39.

Alonso’s next position gain fell into his lap: Pierre Gasly and Sebastian Vettel collided ahead of him. Alexander Albon then pitted before Alonso could catch him, allowing the Alpine to run in consistent clear air.

A new threat had emerged behind, however. Race leader Charles Leclerc was getting close to lapping him. Alonso had to keep his pace up to reduce the chance of being shown blue flags which would force him to slow down and let the leader by.

The picture complicated further when Ocon pitted for the second time and rejoined behind his team mate.

Ocon was lapped by Leclerc, but un-lapped himself shortly before the leader pitted. Alonso, meanwhile, successfully stayed far enough ahead of the Ferrari to avoid being lapped.

For the second time in one race, Alonso was told to let Ocon by. He was then quickly caught by Russell, who he put up more of a fight against before losing the position.

But soon after he rejoined he realised something wasn’t right with the car. Exactly what Alonso could see of the developing problem with his front-left wheel isn’t clear. He kept his communication with the team to an absolute minimum, telling them only that he needed to pit again.

Why did Alonso avoid going into any detail about his problem? Likely because, had he said anything concerning a problem with his car, the team’s rivals and the stewards would have been alerted to Alpine potentially having released his car in an unsafe condition and an almost certain penalty.

As it was, the stewards took an interest in the problem anyway, and investigated whether Alonso’s loose wheel had been caused by the team releasing the car from the pits in an unsafe condition. They later ruled Alpine had followed all necessary rules.

“In the hearing, the driver stated that he cannot see the rim of the wheel and that all he felt was a small vibration,” the stewards explained.

Even so, the second pit stop was a hammer blow to Alonso’s fine recovery effort. Having originally rejoined immediately behind Daniel Ricciardo in 10th place, by the restart Alonso was down to 14th and back behind Stroll. He told his team to forget about scoring any points for the afternoon.

However, Alonso set about mounting another fightback and by lap 62 he’d already passed Stroll and Gasly.

Alonso passed Albon on lap 67, leaving only Bottas between him and the points. He got the Alfa Romeo on the final lap, bagging a single point for a hard afternoon’s work.

RaceFans is run thanks in part to the generous support of its readers. By contributing £1 per month or £12 per year (or the same in whichever curreny you use) you can help cover the costs of creating, hosting and developing RaceFans today and in the future.

18 comments on ““Oh, so unlucky!” How Alonso’s cursed Austrian Grand Prix unfolded on his radio”