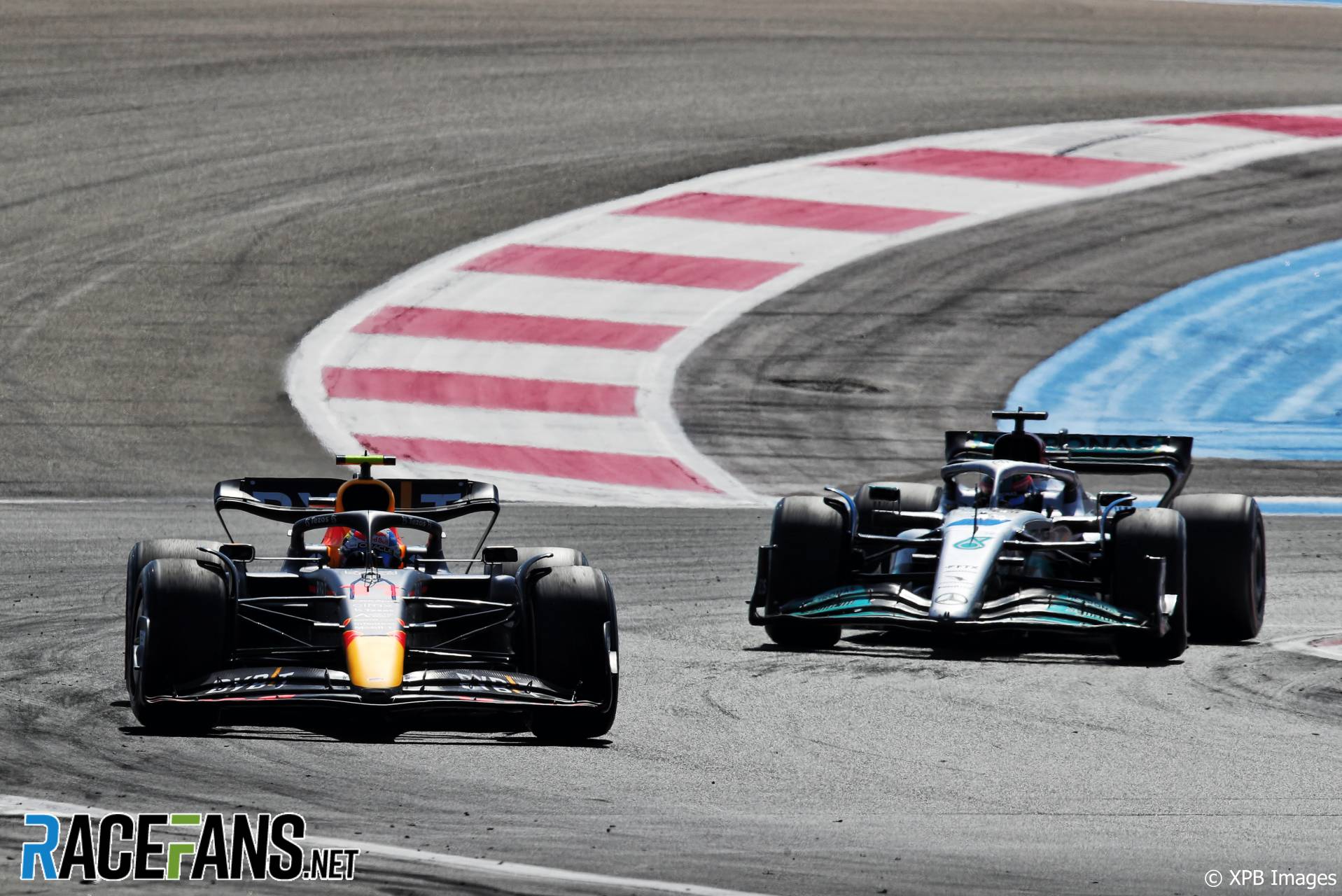 Sergio Perez was left fuming after what he believed was an error with the FIA’s Virtual Safety Car system led to him losing the final place on the podium at the French Grand Prix.

George Russell pounced on Perez at the restart of the race, taking third place off him with four laps to go.

Perez said the VSC system was “totally wrong” and “interfered with the result” of the race. He pointed out he was originally told the race was about to restart approaching turn eight, but it did so much later than he expected, at turn 13.

The FIA sporting regulations start that once teams are given the message “VSC ending”, the race will then restart “at any time between 10 and 15 seconds later.”

However on this occasion a problem occured with the VSC system. The race did not restart and the VSC period continued. The FIA switched to a backup system, and the procedure to end the VSC period was triggered a second time.

“A second VSC ending message was sent due to a hardware issue, which led to an automated switch to backup systems that worked exactly as they should in that scenario,” an FIA spokesperson told RaceFans.

“The same information is supplied to all teams concurrently. The VSC ending countdown time to the green light being displayed on the trackside panels is always random.”

During a VSC period, a target maximum lap time is set which drivers must not lap quicker than. To ensure they stick to this target around the entire lap, their difference to it is measured at a series of intervals.

When a race is due to restart, drivers pay close attention to these intervals, ensuring they reach them as early as they are allowed to without violating the “delta” time difference.

In today’s race, when Perez’s race engineer Hugh Bird told him “Virtual Safety Car ending” as he approached turn eight, Perez accelerated to restore as much of a lead over Russell as he could under the delta.

However the race did not restart and Russell closed back in on Perez at Beausset. Red Bull reminded their driver to “stay on the delta.” He asked “why isn’t it ending?”

“Stay on the delta,” Bird reminded him. The second instruction to restart the race then came through. Bird told Perez: “Virtual Safety Car ending” as he rounded Bendor, turn 12.

Behind him the communication on Russell’s radio was more one-way. Ricardo Muscconi told him the VSC period was ending as they approached the chicane. When it continued, Musconi said “still VSC ending, watch your delta” as Russell closed back up to Perez.

Like Bird, Musconi told his driver the VSC period was ending when the second message came through. As both drivers got on the power Perez had more wheelspin than Russell, who passed him on the approach to turn 14.

Speaking after the race Red Bull team principal Christian Horner was unsure whether both cars had been given the same information. “What was frustrating for him was there was an issue with race control, with the VSC, because they couldn’t turn it off, so they had to do a reset,” said Horner.

“Just talking with him, he was saying he wasn’t getting the delta in his car. So he was bang on his delta and I think George either pre-empted it, but was within the delta, or maybe the information to that two cars was different. So we have to go and explore that.”

As the FIA indicated, there was no sign the drivers had been given different instructions. But in the unusual circumstances of the VSC period not ending as planned, Perez had reacted slightly differently.

Other teams found themselves in the same position. Asked by RaceFans whether the VSC situation caused any confusion over when the race would restart, Alfa Romeo’s head of track engineering Xevi Pujolar said: “No, it’s just annoying because we thought that, okay, the safety car is ending and it was not ending and then we didn’t know what was happening.

“But then a few seconds later it was a message from race control and we informed the drivers that there was an issue. But other than that it was okay.”

RaceFans is run thanks in part to the generous support of its readers. By contributing £1 per month or 12 per year (or the same in whichever currency you use) you can help cover the costs of creating, hosting and developing RaceFans today and in the future.