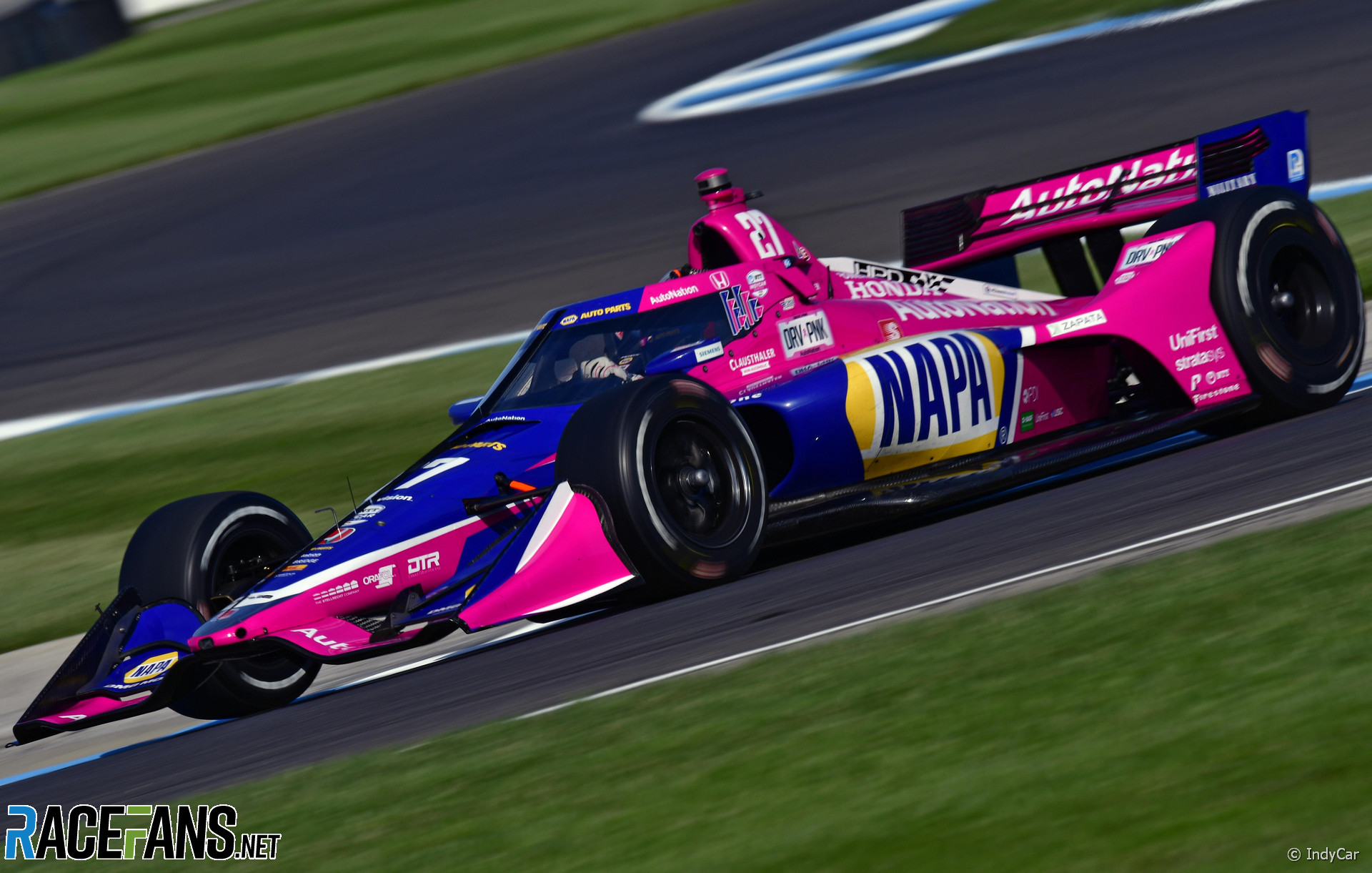 It had been over three years since the last time Alexander Rossi visited victory lane in the IndyCar Series. But the 2016 Indianapolis 500 winner’s long dry spell finally came to an end as he won the Brickyard Grand Prix at the Indianapolis Motor Speedway road course.

It was the latest in a string of misfortunes for Herta, who won the Grand Prix of Indianapolis at the same track in May. Herta had led 17 of the first 41 laps today, but after striking the kerb at turn nine, he lost drive and eventually crawled to a stop at the entrance of pit lane. He was credited with a 24th-place result.

That moved Rossi, who started second, into the race lead ahead of rookie Christian Lundgaard. Rossi maintained his advantage after the final round of pit stops, despite a slow stop bringing his lead down from four seconds to just two-and-a-half.

But Rossi was able to manage his fuel, lapped traffic and a minor vibration from his right-front wheel to keep Lundgaard in his rear view mirrors. Leading 44 laps, Rossi was able to finally close the deal on a long-awaited victory – Rossi’s first IndyCar win in 49 races, dating back to the 2019 Grand Prix of Road America, and the eighth of his career.

A year after his one-off IndyCar debut in 2021, Lundgaard finished second for his maiden IndyCar podium. The former Alpine Academy prospect is now 27 points ahead of David Malukas in the battle for Rookie of the Year honours. This is also the first podium finish for Rahal Letterman Lanigan Racing since last year’s Texas 375.

Will Power’s race appeared to be ruined when he fell from fourth to 16th in the opening lap, after a multi-car chain reaction accident that sent Pato O’Ward spinning around at turn two. But the Penske driver pitted off-sequence during the first caution period on lap four and saved enough fuel during the ensuing stint to bring himself back on sequence when the second caution of the race came out after Simon Pagenaud’s fuel tank ran dry on lap 35.

Power was able to take advantage of his pit strategy and held off Penske team mates Scott McLaughlin and Josef Newgarden to finish in third place, and take the lead in the IndyCar Series standings by just nine points over Marcus Ericsson, who climbed from 25th on the grid to finish 11th.

Behind fourth-place McLaughlin and fifth-place Newgarden, Rinus VeeKay finished in sixth, Graham Rahal seventh, while Scott Dixon came from 20th on the grid to take a strong eighth.

Pole sitter Felix Rosenqvist led the first seven laps, but dropped back as his first stint progressed and had a few slow pit stops which dropped him to ninth place, followed by embattled IndyCar champion Alex Palou, who completed the top ten.

O’Ward finished 12th after his opening lap dramas, despite running on the same strategy as Power.

With just four races remaining, Power leads the championship standings ahead of Ericsson, while Newgarden, Dixon, O’Ward, and Palou remain in positions three through six at the top of the table, covered by just 52 points. The championship returns to Nashville, Tennessee for its second race on the street track next week.