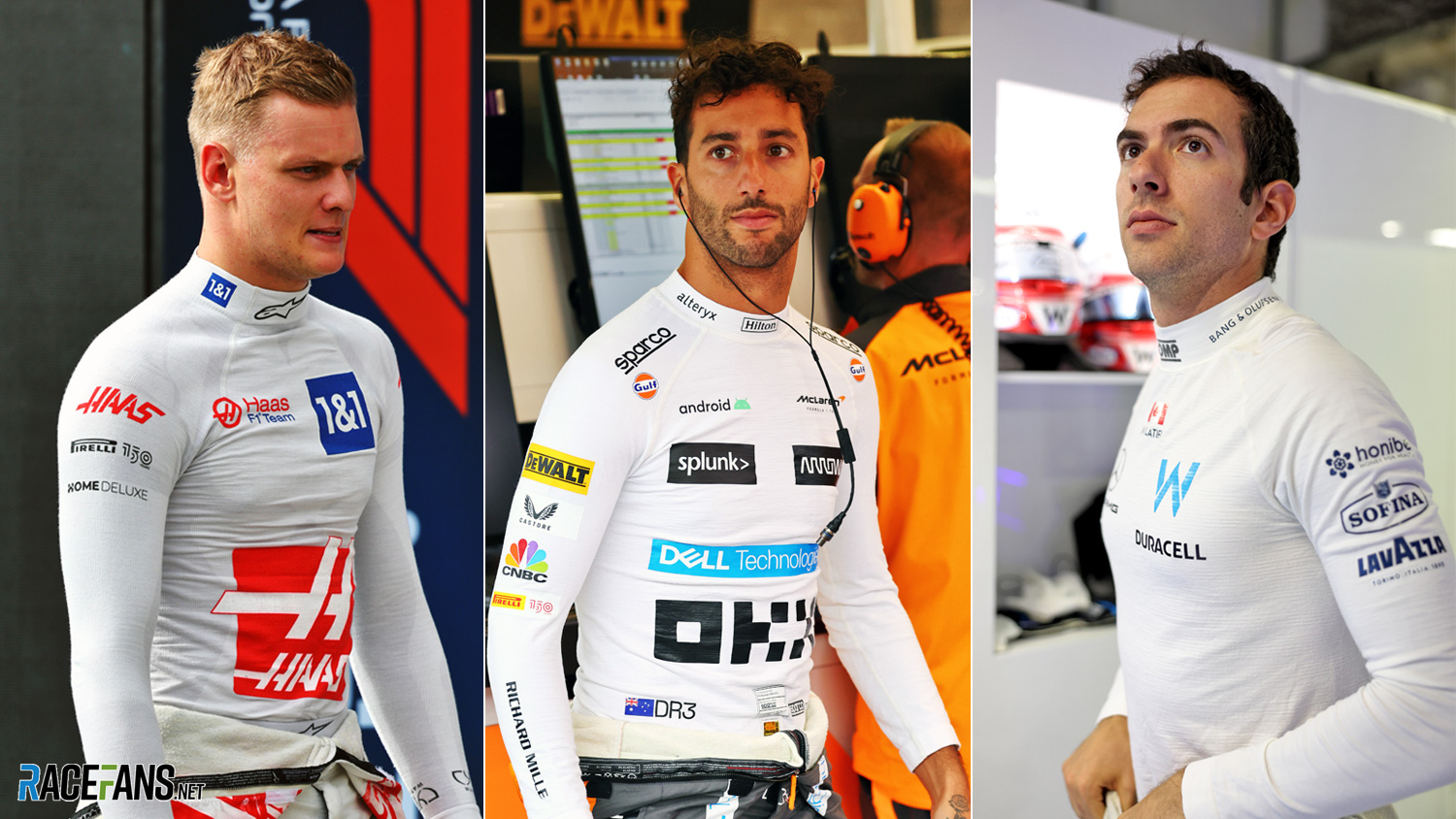 Formula 1’s driver line-up for 2023 moved another step closer to completion today, as AlphaTauri confirmed Yuki Tsunoda will remain at the team for a third year.

The final spaces on next year’s grid are filling up quickly. With McLaren’s decision to appoint newcomer Oscar Piastri, at least one of this year’s current crop will be let without a seat next year.

But there could be more than one left without a seat when the music stops. The future of this trio of drivers is uncertain.

Having been promoted into F1 through the Ferrari Driver Academy last year, Mick Schumacher’s place at Haas was thrown into question when reports claimed he will not retain Ferrari’s backing next year.

Schumacher had a rough start to his second year at Haas. He easily had the beating of fellow rookie Nikita Mazepin last year, but the experienced Kevin Magnussen has proved a much tougher benchmark and Schumacher had a pair of heavy and expensive crashes early this season in Jeddah and Monaco.

Ferrari team principal Mattia Binotto said earlier this month at Zandvoort that he wanted to see a clear improvement from Schumacher this year. He plans discussions with Haas over the driver’s future.

“As we said at the start of the season it’s important for Mick this season to improve,” said Binotto. “We will in a few races sit down with him, make a balance of the season, and we’ll do that as well together with Haas and decide for his best future.”

However Ferrari’s decision to put Antonio Giovinazzi in the Haas for two practice sessions has to be taken as a sign they are considering recalling the driver who lost his previous F1 drive at Alfa Romeo at the end of last year. With Alfa Romeo’s line-up unlikely to change – Valtteri Bottas has a long-term deal and Zhou Guanyu is expected to earn a second season – Schumacher’s best chance of remaining on the grid appears to be his current address.

Haas team principal Guenther Steiner insists Schumacher is “still in the running” to stay at the team next year. He pointed out the 23-year-old has raised his game since his rough start to the season. “Mick did a very good job in Canada, Austria and Silverstone, and since then the car was not at par.”

But the team hasn’t re-signed Schumacher “because we want to wait to see if that is the best decision,” said Steiner. “He’s in the same position as all the other drivers that are on the market. We just want to try to make the best decision for the team’s future.”

It goes without saying that Ricciardo’s career direction has not gone to plan since he walked out of Red Bull in 2018. He decided to move on from Renault after two seasons, throwing his lot in with McLaren, but somehow never clicked with the Woking team’s cars and finds himself cast out a year before his contract was due to end.

His options for 2023 are limited, and his chances of finding a halfway competitive drive rest not only on finding a team with an opening, but one that is willing to hire him. That list shrinks rapidly once the big three teams plus McLaren are excluded.

Alpine could have been a possibility, despite the manner in which he left the team formerly known as Renault in 2020, as the top management having changed in the last year. However it appears Red Bull are preparing to release Pierre Gasly from his contract at their second team AlphaTauri in order to advance his career elsewhere. Their announcement of Tsunoda’s new deal today made no mention of Gasly’s existing 2023 deal.

Ricciardo’s options may therefore be to join a lower-order team for 2023 or take a sabbatical and aim to return to the grid in 2024 in a more competitive car. He was caught off-mic at Zandvoort suggesting the latter scenario to Sergio Perez.

After chopping and changing between teams over the last four years, Ricciardo is prepared to be patient when it comes to deciding his next move. “From 2017, every two years I’ve been now with a different team from that period onwards,” he acknowledged. “So I don’t want to just sign something and then be like ‘oh wait, now something else is there for ’24’.

“So it’s probably not as simple as just getting somewhere on the grid next year. That’s where it could go probably many different directions and that’s where I’m like, I don’t think anything needs like an immediate decision.”

However he isn’t ruling out the possibility of throwing his weight into a new long-term commitment to a team. “I still definitely have the ability to love a project,” he said. “Of course, if it’s like this kind of longer project or this one where are you going to win tomorrow, I’m going to go for the quick wins. But they are things I will definitely give some thought to.

“I don’t want to be too stubborn and or short-sighted and like ‘oh, no, I’m not interested in that’. I will give everything respect and thought.”

It’s no secret that the backing Nicholas Latifi brought to Williams was a key factor in the team’s decision to promote him to F1 two years ago. The question was whether he could use that opportunity to make a case for staying in F1 long-term.

That wasn’t easy to do in his two years up against future Mercedes star George Russell, but Latifi took a pair of points finishes last year which bolstered his cause.

However he has struggled to build on that it 2022. It didn’t help matters that he ended the previous season a target of online vitriol due to his innocent role in the farcical conclusion to last year’s world championship. But he followed up that Yas Marina crash with other incidents at the beginning of the season as he struggled to gain confidence in Williams’ FW44.

While new team mate Alexander Albon was in the points as early as round three, Latifi remains the only full-time driver yet to score this year. Speaking ahead of the Dutch round, team CEO Jost Capito wouldn’t be drawn on whether he would commit to Latifi for another year.

“He has to show his potential,” said Captio. “I believe he has the potential. What he’s shown from Silverstone and Hungary, it was great there.”

If Williams were looking for potential, they will have found it not in Latifi but the driver who appeared alongside him as a substitute at Monza. Nyck de Vries dazzled the team with a points finish on his debut. Latifi made a tense appearance before the media after qualifying when he was quizzed about being out-qualified by the newcomer.

De Vries therefore looks like the favourite for the seat alongside Albon next year. Latifi’s hopes of holding onto his seat therefore rest on Red Bull snapping De Vries up for AlphaTauri, Ricciardo holding out for a more competitive car and Williams opting not to promote their junior driver Logan Sargeant who is starring as a rookie in Formula 2.

View the current list of 2023 F1 drivers and teams

40 comments on “Who will be left without an F1 drive when the final places are taken for 2023?”