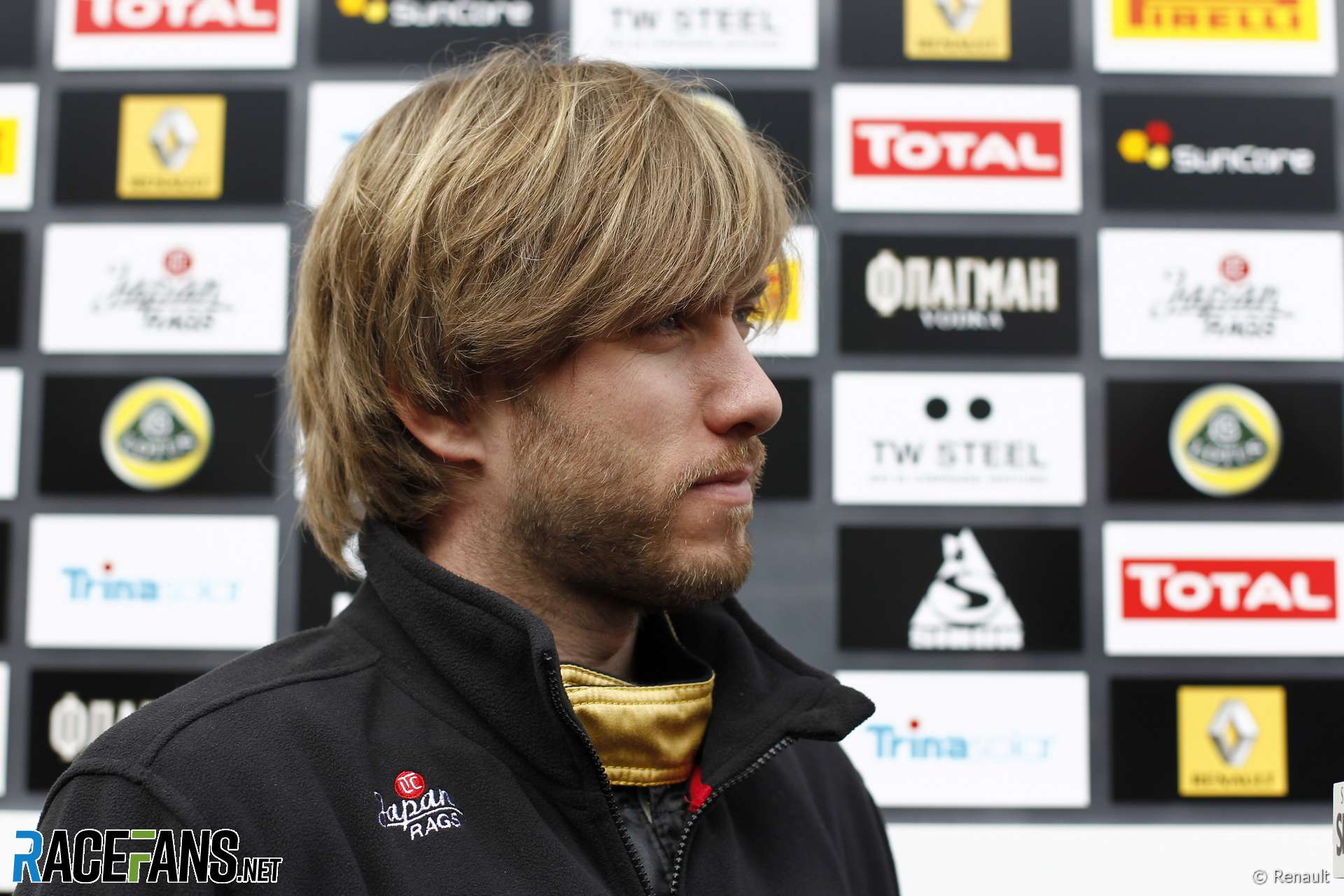 Nick Heidfeld was racing Motocross bikes with his brothers Tim and Sven before the age of five. He tried karting at a circuit near the Nurburgring and showed promise, and received his first kart when he was eight.

He spent two years in the German F3 series with Opel Team BSR. The first season saw him take three wins and finish third overall, the title being won by future F1 driver Jarno Trulli Heidfeld returned in 1997 and went into the final two races at the Nurburgring three points behind Timo Scheider. But with a pair of wins Heidfeld snatched the title with 224 points to Scheider’s 218. He also won the Monaco Formula Three race.

He got his first Formula 1 test the same year with McLaren-Mercedes and moved up to Formula 3000 with the team’s support. Heidfeld finished runner-up to Juan Pablo Montoya in 1998, having won three times. The next year Heidfeld dominated the category, winning four of the first six races and comfortably beating Jason Watt to the title. He also made further testing appearances for McLaren and it was believed the team were grooming him for a race seat.

But when Heidfeld arrived in F1 in 2000 it was with Alain Prost’s team. It was a difficult debut with a slow, unreliable car and a very experienced team mate in Jean Alesi.

Heidfeld compared well with his team mate, but the pair collided in the Austrian Grand Prix when Alesi tried to pass him.

The following season Heidfeld switched to Sauber where he partnered rookie Kimi Raikkonen. Heidfeld scored his first podium on his third outing for the team and out-scored Raikkonen 12 points to nine, but McLaren were impressed by the young Finnish driver and signed him instead of Heidfeld to partner David Coulthard for 2002.

Heidfeld said: “It’s not a big disappointment especially because everyone has seen it coming over the last couple of weeks, but of course I was surprised. They should know what they are doing, but I don’t know – I don’t think I’ve done a lot wrong. I didn’t do a worse job than [Raikkonen].”

He stayed at Sauber for another two seasons, first with Felipe Massa as his team mate, then Heinz-Harald Frentzen. But the team were slipping down the field and Heidfeld found himself at Jordan in 2004. It was another team on the verge of being taken over but Heidfeld managed to claim a pair of points finishes.

That attracted the attention of Williams and engine partners BMW, who tested Heidfeld alongside Antonio Pizzonia for a 2005 race seat. Despite Pizzonia having driven for the team as a substitute in 2004, Heidfeld won the 2005 seat with support from BMW’s Mario Theissen.

Heidfeld quickly repaid their faith, scoring podiums at Sepang, Monte-Carlo (following a gutsy pass on Fernando Alonso) and the Nurburgring, having started from pole position at the latter. Late in the year he suffered a crash in testing at Monza and then a cycling accident, causing him to miss the final five rounds. Williams and BMW went separate ways at the end of 2005, with BMW taking over Sauber to set up their own F1, team, and taking Heidfeld with them. He was comfortably quicker than Jacques Villeneuve in the first half of the season before the 1997 world champion was replaced by Robert Kubica.

Heidfeld got the new team on the podium at the Hungaroring but his rookie team mate was third at Monza. Heidfeld publicly admitted that Kubica had forced him to raise his game and as 2007 got under way it certainly looked as though he had.

With BMW comfortably the third quickest team Heidfeld was regularly chasing the McLarens and Ferraris and occasionally claiming a scalp – as when he passed Alonso at Bahrain to take fourth place off the McLaren driver. He ended the year fifth with 61 points to Kubica’s 39.

Heidfeld spent most of 2008 struggling to match Kubica’s pace, especially in qualifying. But he was extremely consistent, taking a classified finishing in every round and breaking Michael Schumacher’s record for most consecutive finishes. But he also extended his record for most second place finishes without a victory, while Kubica scored his and BMW’s maiden win at Montreal.

By the end of the year Heidfeld was back on terms with and even ahead of Kubica once again. The pair remained at BMW for 2009 but their new car was well off the pace and racing for wins was out of the question.

Heidfeld managed to out-score Kubica but with BMW quitting the sport both men moved on to new teams in 2010. Heidfeld joined the new Mercedes Grand Prix team as the reserve driver alongside race drivers Schumacher and Nico Rosberg.

Shortly afterwards he re-joined Sauber to replace Pedro de la Rosa for the final five races of the year.

However he was replaced by Sergio Perez at the end of the season.

An opportunity to continue race in F1 presented itself when Kubica was badly injured in a rally accident in February.

Heidfeld was drafted in to take the Polish driver’s place at Renault from the start of the season.

His year got off to a promising start with a podium finish in Malaysia. But he tended to qualify behind junior team mate Vitaly Petrov and despite scoring most of the team’s points was dropped after 11 races.